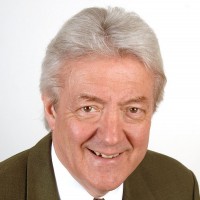 A features writer and sports presenter described as a “consummate professional” has died aged 76.

Tributes have been paid to Bob Hall, who is best known for his work covering sport for ITV Central and latterly Sky Sports News.

Bob, pictured, also worked for the Wolverhampton Express & Star on the features desk during a career spanning four decades.

Sky Sports director of football Gary Hughes described him as a “hugely respected broadcaster with one of the great voices in the industry”.

He told the Express & Star: “A consummate professional, Bob was a highly valued member of the Sky Sports family and he will be sorely missed by all.”

“He was a tremendous ad-libber. He could fill space and time and get you out of any tricky situation. His memory was fantastic.

“He was terrific. His detail, memory and recall used to astonish me. He was a wonderful man to have on your side. You could always rely on Bob.”

And former head of sport at ITV Central Gary Newbon said: “It’s a huge shock, we’re all stunned. As a presenter, Bob was a really solid, safe pair of hands, very professional, a good presenter.

“He never let you down. He was a good operator and a good professional.”