Regional news titles are set to live-stream a conference being hosted at two sister dailies’ offices.

Reach plc newsletter title the Northern Agenda is hosting its first ever conference this Friday to examine the Government’s levelling up agenda for regions of the UK.

The conference, which will be hosted at the Newcastle offices of Reach dailies The Chronicle and The Journal, features keynote speakers including Levelling Up Minister Neil O’Brien, Shadow Levelling Up Secretary Lisa Nandy and Labour’s Greater Manchester mayor Andy Burnham.

The five-hour event will be streamed live on the websites of “a number of major Northern news titles”, including The Chronicle’s Chronicle Live site, although other sites involved have yet to be confirmed. 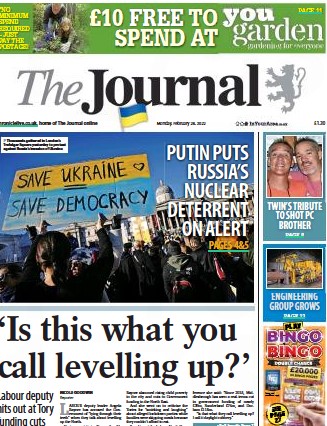 The Chronicle, the Journal and the Northern Agenda have been among a number of Northern dailies to push the issue of investment in their region in recent years.

Last Monday, The Journal splashed on Labour deputy leader Angela Rayner’s criticism of the Government over the issue, pictured above.

Northern Agenda editor Rob Parsons told HTFP: “I’m delighted by how well received The Northern Agenda has been since its launch last year. As well as the daily newsletter about politics in the North, we also now do a weekly podcast and have led two very impactful campaigns with titles like the Manchester Evening News on issues that affect our region.

“Northern Agenda Live is part of our strategy to bring the brand to a wider audience and help make it a major part of the conversation about the future of the North.

“We’ve brought together a great line-up of heavyweight politicians and expert panellists to try and answer the question: what will the North look like in 2030 (the date set by Michael Gove for the Levelling Up agenda to be judged).

“It should be a fascinating and insightful event about the future of Northern politics ahead of the next General Election, when the North’s so-called ‘red wall’ will again hold the key to entering Downing Street.”