A regional publisher is hoping for a subscription boost after winning the exclusive rights to broadcast a Line of Duty reunion.

Newsquest will screen the one-off event across to online subscribers of its titles after the Greenock Telegraph, one of its regional dailies, reached out to the star of the BBC crime drama and former paperboy Martin Compston.

Mr Compston will be joined at the charity event by co-stars Vicky McClure and Adrian Dunbar, as well as Line of Duty writer Jed Mercurio, where they will be interviewed live on stage by journalist and broadcaster Gordon Smart before he opens up the floor to the audience for a question and answer session.

The Telegraph contacted the event’s beneficiary Ardgowan Hospice, where Mr Compston is a patron, to offer to bring in a specialist team to film and produce a recording of the reunion at Port Glasgow Town Hall. 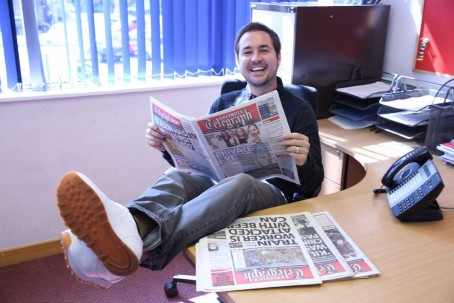 Martin Compston at the Telegraph’s office

Its owner Newsquest pledged to further back the fundraising bid and will now host the event across all of its subscription sites UK-wide, with all first month fees paid by new subscribers being handed to the hospice as a result.

Telegraph editor Brian Hossack said: “Martin has always been proud of his roots and a fantastic supporter of Greenock and this title, so naturally we wanted to do all we could to help him raise as much cash as possible for Ardgowan.

“The fact that the 400 tickets sold out in 48 seconds demonstrates the massive appetite from fans of the show across the UK to see the cast reunite.

“We offered to help out and get it professionally filmed and packaged up and this will go live on all of Newsquest’s subscription sites nationwide for fans to enjoy.

“People can pay as little as £1 to sign up and get exclusive access and all of that will go directly to Martin’s favourite charity.

“Given that almost 13 million people watched the last episode of Line of Duty, we are hoping we can raise a lot of money for this very worthy cause, while also giving fans of the show the chance to enjoy this very special event.”

Fans of the programme had called for a live stream of the event to be made available after tickets for the event sold out.

The recording of the reunion will go live on every Newsquest subscription site and those who already subscribe will also receive exclusive access to the video.

Each site will also contain links and information about how people can sign up to watch the Line of Duty reunion.

Mr Compston has retained close links to the Telegraph and guest edited his hometown newspaper in 2018.

Telegraph audience and content editor Amy Shearer said: “A lot of hard work has gone into pulling this together and we will have a string of exclusives around the event on our sites across the UK in the build-up.

“It is a real coup for the Greenock Telegraph, but also Newsquest, to be able to secure exclusive coverage of something of this size.

“We want people to subscribe and watch, knowing that their money will also be going directly to a fantastic cause.”