Press photographer who ran his own news title dies aged 86 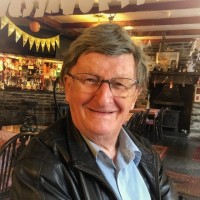 A press photographer who also ran his own news website has died aged 86.

Tributes have been paid to David Flower, who worked as a freelance across Cornwall for titles including the Cornwall & Devon Post, Cornish Guardian, Western Morning News and Sunday Independent.

David, pictured, also launched and ran a news and history website for Tintagel, the village where he lived.

His fellow photographer and friend Adrian Jasper worked alongside him for several years.

Adrian told the Post: “It was easily some of the most memorable and enjoyable times I can remember as a photographer.

“David would always have many a story to tell and always with a smile on his face, but above all, he was a consummate professional and wanted to do the very best job he could for the paper and the people he was photographing.

“He was a great photographer and was liked by everyone who knew him.

“His local knowledge was immense. There’s no doubt he will be sadly missed especially around the many local sport events he covered in the local area with great passion and dedication.”

David was born in Lambeth, London, but moved to Tintagel as a child.

He trained as a television engineer with Bush Radio in Plymouth, before starting his own business in Tintagel called Flower’s Television and Electrical Services Ltd.

David retired from his electrical business in 2002, but was approached by the then-editor of the Post to become a photographer.

His friend Peter Glaser told HTFP: “I got to know him very well through our mutual fighting spirit in the face of adversity in supplying local newspapers with photographs and stories, and getting paid.”

David had three children, Jackie, Robin and Tim, with his first wife Carole.

After they divorced he met his second wife Valerie in 1981 and they had been together for more than 40 years.