A minister has attacked a regional daily over its coverage of the Sue Gray report – despite it winning widespread industry praise.

Simon Clarke criticised the Northern Echo after it ran with the headline ‘Blood on your filthy privileged hands’, paraphrasing the words of Andy McDonald, Labour MP for Middlesbrough, in the House of Commons yesterday.

Mr Clarke, Chief Secretary to the Treasury and Tory MP for Middlesbrough South and East Cleveland, described the splash as “deeply distasteful” and accused the Darlington-based Echo of pandering “to the worst excesses of Twitter” in a post on the social media site.

The rant came after Echo audience and content editor Nick Gullon had posted an image of the front page with the caption ‘The North-East turns on Boris Johnson’, with a poll by the newspaper revealing 66pc of readers want him to resign over the issue. 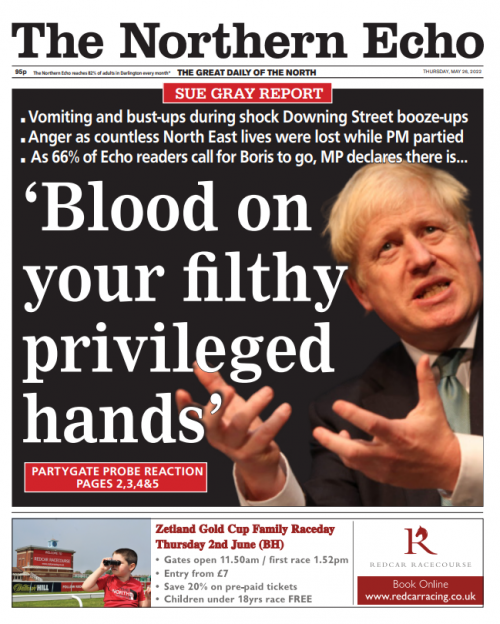 “However strongly people may reasonably feel about events in Downing Street, this is grotesque and does nothing more than pander to the worst excesses of Twitter.”

But Echo editor Gavin Foster defended the splash, telling HTFP: “This front page and our coverage both on our website and in print, is simply about standing up for what is right and wrong.

“As countless people in the North East lost their lives, as families were robbed of the chance to say last goodbyes and frontline health workers wilted under the strain in hospitals and care homes – the PM and his staff chose to flout the rules they were asking each an every one of us to follow to help save lives.

“Despite the damning evidence in the Sue Gray report, Boris stood up in front of the Commons and once again delivered a back-handed apology, still trying to hide behind a veil of ‘I didn’t know I was doing anything wrong’ and right-thinking people in the North East have had enough.

“What went on in Downing Street was clearly a culture throughout the pandemic that was morally abhorrent that was overseen and accepted by our Prime Minister. By his own admissions changes have been made to stamp out such behaviour. It’s simply indefensible.”

Ms Gray’s report criticised the culture and leadership in Downing Street after investigating 16 events among which the police found multiple breaches of coronavirus regulations which had been imposed upon the public by Number 10.

Among those to back the Echo splash was Yorkshire Post editor James Mitchinson, whose paper also led on the report’s findings this morning. 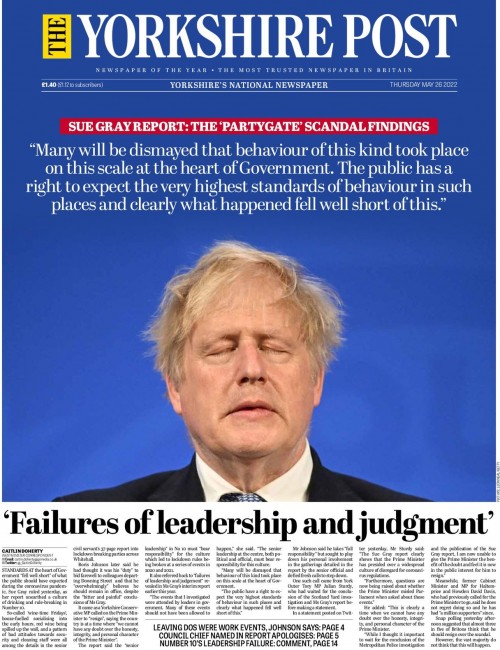 The critical stance taken by both the Echo and the YP over the Partygate affair is potentially significant in that their patches include many of the so-called ‘Red Wall’ seats captured by the Tories from Labour at the 2019 General Election.

James, who has previously called for Mr Johnson to resign, wrote in the Echo’s defence: “Simon Clarke: turns a blind eye to his bosses recklessly endangering life, supports law breaking at the very top of government, stands behind the flurries of deceptions designed to cover up the betrayals… then has a tantrum when a great northern paper holds up a mirror.”

Former Echo editor Peter Barron also praised his ex-colleagues, adding: “Great stuff. Proud of my old paper, saying it how it is.

In an editorial for the Echo, chief feature writer Chris Lloyd noted the PM seems “not to have any shame”.

Wrote Chris:  “For all his bumbling persona, he has played the affair quite brilliantly to ensure he clings to office. When the clamour for him to resign from his own side was at its loudest in January, he punted it into the long grass by calling in Sue Gray to do a lengthy official report.

“The distance in time has allowed the head of steam to fade away, and Tory MPs have seen the most plausible replacement – Richmond’s Rishi Sunak – fizzle out as he has been trapped by his own fine and his wife’s unfeasible wealth.

“So today, in the Commons, we had the unedifying sight of the British Prime Minister being taunted by ppposition MPs with lurid comments like the one from Andy McDonald, the Middlesbrough MP, which features on today’s front page, and then later at the press conference being asked time and again if he were a liar.

“Talk of having a liar for leader, of there being one rule for the privileged few and another for everyone else, corrupts the soul of the nation, and Mr Johnson is responsible for that.”

In the Commons, Mr McDonald had asked the PM: “When we saw pictures of the PM partying in the middle of the pandemic, was he toasting his assault on the working class?

“And I ask him, how on earth does he sleep at night with so much blood on his filthy, privileged hands?”

In response, Mr Johnson said: “From furlough onwards everything we have done since the pandemic began has been to get money into the pockets of the working people of this country, and those are the people time and again that we have prioritised.

“I do not for a moment doubt that things are tough… but it is our intention to get this country through it, and we will get through it very well by putting our arms around people as we can, and as we will because of the fiscal firepower that we have, but also by making sure that we continue with the high wage, high skill, high employment economy.”