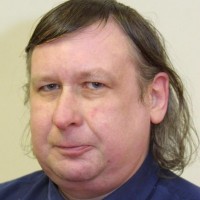 A journalist who spent almost half a century with his hometown newspaper has died aged 66.

Tributes have been paid to Barry Jones, who earned the nickname ‘Mr News’ for his service to the Powys County Times.

Barry, pictured, joined the County Times straight from school in the early 1970s and continued working at the Welshpool-based weekly until 2020.

He had dealt with health issues for most of his adult life and had battled kidney problems for many years, according to the paper.

“All his friends and colleagues know that he has fought a brave fight against failing health for many years, but the news still comes as a shock. I saw him only last week.

“I worked with Barry for over 40 years and we became good friends. He joined the County Times straight from school and quickly developed a solid reputation with colleagues and members of the public.

“He was a trusted journalist and became ‘Mr News’ in the Welshpool area with a brilliant eye for a story.

“Nothing much ruffled him and I lost count of the occasions when he would leave the building saying he had just filed some copy only to find he had uncovered the splash of the week without a hint of excitement.

“He will always be remembered for his sense of fun and infectious laugh – but most of all as an outstanding old-school journalist.”

Ex-County Times photographer Phil Blagg spent more than 20 years working with Barry and described him as a “one-off”.

He told the paper: “I loved him to bits, I don’t think I’ll ever meet anyone like him again.

“He was someone who was very intelligent but he never liked to let on how clever he was; he knew a lot about a lot of things, he knew so much about everything. His knowledge of all things was unbelievable.

“When I first joined the paper in the mid-90s I remember that he was the main front page story every week without fail.”

Barry, who died on 17 May, covered patches including Machynlleth and Bishops Castle during his career, as well as overseeing the ‘What’s On’ section.

Current County Times sports and community content editor Gavin Grosvenor said: “Barry was one of the longest-serving journalists in County Times history and already well established when I joined.

“Barry was the last of a dying breed of journalists who came through during the 1970s and one who witnessed so much change during his working life.”

Barry’s sister Pauline added working for the County times was “his life” and “all he wanted”.