Journalist opens up about cancer fight to raise awareness

A regional journalist has shared his personal battle with bowel cancer after he became the first person at his local hospital to trial a new drug.

Paul Geater, reporter for The Ipswich Star, was given the immunotherapy drug Pembrolizumab after signs that the bowel cancer he first had removed back in 2018 was starting to return.

Immunotherapy is an alternative to chemotherapy which encourages the body’s own immune system to fight cancer cells and can produce good results with less side effects than some of the more traditional treatments.

Paul made visits to the hospital three times a week for an infusion and the blood tests and scans showed that the treatment is working. This has now been reduced to every 6 weeks as the results have been so encouraging. 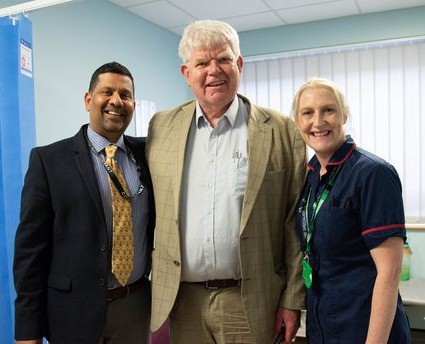 Said Paul: “My only side-effect has been a slight rash on my hands which quickly cleared up with some Hydrocortisone cream.

“One thing I’ve learned over the last few years, though, is that bowel cancer can take many different forms – and what is suitable for one patient may not be suitable for another.”

He was told that this type of immunotherapy is only suitable for those whose tumour has a particular genetic make-up, about 5-8% of bowel cancer patients.

He added: “For me that was particularly important – my cancer was caused by a genetic condition called Lynch Syndrome which runs in one side of my family and Lynch cancers can be resistant to chemotherapy so the fact it could be treated by immunotherapy was vital.

“What is particularly positive about immunotherapy is that in some cases where the treatment has been stopped, the cancer has not come back.

“The doctors were both keen to get the message across that while bowel cancer is a very serious condition, there are stories of hope that can come out of it.

“I know that. I have two close friends who had bowel cancer more than a decade ago. Both made a full recovery and are among the most active people of my generation that I know.”