IPSO rules ‘anti-vaxxer’ is not a discriminatory term 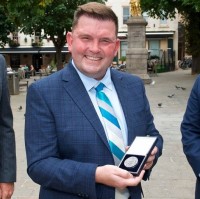 The press watchdog has ruled that describing someone as an “anti-vaxxer” is not discriminatory.

The Independent Press Standards Organisation has found in favour of the Jersey Evening Post after a complaint by reader Duncan Cassidy.

He had taken issue with a number of aspects of a column by the late Gary Burgess, pictured, which was published in 2021 on the subject of vaccination uptake in Jersey.

Complaining under Clause 1 (Accuracy) and Clause 12 (Discrimination) of the Editors’ Code of Practice, Mr Cassidy claimed the piece by Gary, who died on New Year’s Day this year, ridiculed people who had chosen not to take the coronavirus vaccine, telling IPSO he considered the term “anti-vaxxer” to be discriminatory in itself.

In response, the JEP said it did not consider Clause 12 to be engaged.

IPSO found Clause 12 is designed to protect specific individuals mentioned by the press from discrimination based on their race, colour, religion, gender identity, sexual orientation or any physical or mental illness or disability.

Choosing not to take the Covid-19 vaccine is not a characteristic protected by the Code, and therefore the watchdog ruled there was no breach of Clause 12.

Ian Straughan complained under Clause 1 (Accuracy) of the Editors’ Code of Practice over the Blackpool Gazette’s claim there were currently 50 charging points in Blackpool for electric vehicles.

Mr Straughan said that the true figure was significantly lower and that there were only 13 such chargers available to the public.

In response, the Gazette said the disputed figure had been provided by the local council’s press office, following a council meeting which discussed the need for increased investment in this infrastructure.

It added the press office had subsequently confirmed this figure had been obtained from an online database and claimed it was the same database used by the Department of Transport to record electric vehicle charging points.

IPSO found the Gazette was entitled to rely on information provided by the council on this subject, given that it was the relevant authority with oversight of local public infrastructure.

Raja Miah complained under Clause 1 (Accuracy), Clause 3 (Harassment), Clause 12 (Discrimination) and Clause 13 (Financial journalism) about two stories covered by the Oldham Times, the second of which reported that an unnamed 48-year-old man had been arrested by police in “connection with Operation Hexagon – [Greater Manchester Police’s] investigation into child sexual exploitation.”

Mr Miah claimed the second story incorrectly reported that he had been arrested as part of a child sexual exploitation investigation.

The Times maintained that the story did not name or identity Mr Miah as the individual arrested, nor did it accept that the article reported that this individual had been arrested for child sexual exploitation.

IPSO did not consider that the story’s content was sufficient to identity Mr Miah.