A former sports editor has returned to officiating football matches just over a year after suffering two heart attacks.

Mervyn Collins, who worked for the Bury Times and Radcliffe Times from 1980 until 1996, is now serving in the North West Counties League as an assistant referee.

The 63-year-old suffered a “near-fatal” heart attack 15 months ago, followed by a second one in February this year.

He spent eight years on the sports desk of the newspapers, where he was sports editor of the Radcliffe Times, before later moving to the Oxford Mail and then the Evesham Journal. 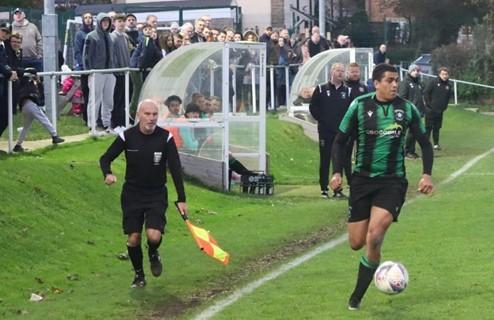 Mervyn Collins, left, back in action as a linesman

Mervyn, who recently ran the line for Bury AFC’s visit to Campion, near Bradford, told the Times: “I never imagined that I would be acting as an official for a Bury game and to be honest never thought I would ever referee again.

“Fifteen months ago I suffered a near-fatal heart attack, followed by a second one in February this year, prior to moving to my new home.

“I actually threw out all my refereeing kit when I left my home in Evesham.

“But having exercised, and luckily had no more heart issue,s I was asked by a local junior club to referee some games this season.”