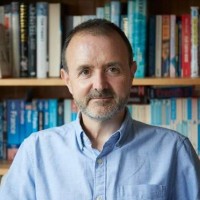 A former regional journalist has published his debut novel – written from the point of view of a dog.

Jonathan Cross has penned ‘Making Very Difficult Things Easy to Do’, which features Bobs the dog as the narrator and serves as an “unlikely inspirational guide on the self-help pathway to greatness”.

Jonathan, pictured, began his career on the Northampton Chronicle & Echo and later became assistant sports editor on the Nottingham Post.

Jonathan told the Chronicle & Echo: “The book was written during the pandemic when some of my work slowed and I had the opportunity to indulge myself in a piece of writing of pure escapism.

“We had recently bought a puppy and I thought it would be fun to frame the usual self-help/self-improvement narrative through the central character of an over-confident cockapoo, the self-declared world’s ‘highest-achieving dog’.

“I wanted to write a book that would make people smile during a fairly dismal time for the world, and while some of the commentary is daft and slightly surreal, there is an underlying message of the value of compassion and kindness in society.

“And by reading the guide, if you believe what Bobs says, you can learn that very difficult things can actually be really easy to do.”

The novel is published by The Book Guild.