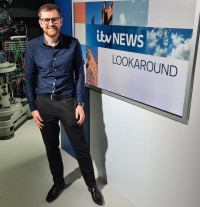 An editorial chief has left his role at an independent news website to join ITV.

Jacob Colley has announced his departure as content editor at Cumbria Crack, where he had worked for the past 16 months.

Jacob, pictured, has joined ITV as a production journalist working on its Border team.

The operation covers Cumbria, Dumfries and Galloway, the Scottish Borders and Northumberland.

Posting on Twitter, Jacob wrote: “I’m over the moon to announce that I’ve started a new job at ITV Border.

Jacob trained at the University of Central Lancashire, in Preston, and began his career as a freelance working on BBC North West Tonight during the 2017 General Election.

Later the same year, he began freelancing for the Carlisle News & Star and Cumberland News before landing a staff job as a trainee reporter there that November.

Jacob became a senior reporter in 2020, joining Cumbria Crack in his most recent role in February 2021.