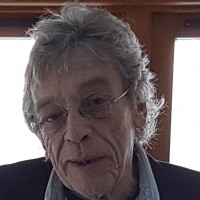 An editor who ran four regional dailies during his career has died aged 74.

Tributes have been paid to David Kernek, better known to many under his previous surname of Flintham, who edited the Bath Evening Chronicle, Brighton Evening Argus, Yorkshire Evening Press and the Northern Echo.

David, pictured, also previously served as both a lobby correspondent and deputy editor at the Darlington-based Echo.

More recently, he had run his own local news and opinion website called the Bath Telegraph.

Pete Barron, who was David’s deputy at the Echo and went on to edit the title for 17 years, has paid a personal tribute to his former boss.

Writing in the Echo, he said: “Above all else, I’ll remember David Flintham – as I knew him when he edited The Northern Echo in the nineties – as one of the best writers I ever worked with.

“He had the highest standards when it came to the use of English and never wasted a word.

“It was my privilege to be his deputy and he taught me a great deal, principally about the art of ‘leader writing’ – the daily task of giving The Great Daily of the North an opinion about whatever was happening in the world.”

Allan Prosser, who worked with David both as his editor at the Echo and his managing director, said: “David was kind, considerate, witty and intelligent. He had very good political instincts and his direction and influence on that aspect of the Northern Echo’s coverage during the bitter and divisive miner’s strike of 1984-85 was full of clarity and consistency.

“I also remember him confounding Margaret Thatcher at a meeting when she turned on him and said ‘Well, I don’t know whose side you are on.’

“David was on the side of ordinary people, and against the pompous, the self-interested, and anyone he regarded as anti-democratic.

“He had an outstanding grasp of history and an impressively economic writing style in which every word earned its place. He tried to share this talent with many young journalists embarking on their careers.”

London-born David began his career on the Basildon Standard Recorder and worked his way through the Slough Evening Mail and the Western Mail, where he was a leader writer.

He then became the Echo’s lobby correspondent and his career flourished through the Pearson subsidiary, Westminster Press, going on to edit four of its titles.

David, who had suffered from cancer, lived in Bath with his wife Diana Cambridge, who is also a journalist and writer, and their daughter Clare.

Allan recounts the story of David’s early life and subsequent meeting with his birth mother which led him to change his name.

He said: “David’s mother, Greta, fled from Linz in Austria to London in 1939 as a 19-year-old to avoid the Holocaust. By the war’s end, she was a young mother ― and a penniless, stateless ‘enemy alien’ ― living with a toddler in the home of a man who had employed her as housekeeper.

“When she became pregnant by him, David, the new arrival was put up for adoption after she made an unsuccessful attempt at abortion. David did not meet his birth mother for 45 years and, when he did, he began using her family name, Kernek.

Allan added: “David was a journalism fellow of the University of Minnesota and spent a year in the United States. This encouraged at least two dominant interests in his life: photography, at which he excelled, and a love of the Rolling Stones, about whom he had an encyclopaedic knowledge, particularly of their Blues roots.

“After retirement his energy and love for journalism could not be contained and he launched and maintained a hyperlocal news website, the Bath Telegraph, which took a wry look at the activities of local authorities and statutory bodies.

“One of his final campaigns, during the Covid-19 pandemic, was to prevent Bath Council demolishing an outdoor bar erected for the benefit of customers in the large garden of the Hare & Hounds, ‘one of the city’s finest inns.’

“I corresponded with him frequently on the issues of the day and he could be relied upon to provide pithy commentary. But I noticed his answers becoming shorter. On the day I sent him a text saying ‘Charlie Watts has died’ I received one word back: ‘impossible.’ It was the last time I heard from him.”