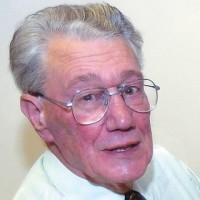 A journalist known as a “fierce champion of the farming community” has died aged 89.

Tributes have been paid to Gerry Barnett, who served the regional press in a career spanning almost 70 years.

He worked at the Evesham Journal in two spells that sandwiched a 34-year stint with the Gloucestershire Echo, where he was district reporter for Evesham and the Cotswolds.

Gerry, pictured, was also a member of the British Guild of Agricultural Journalists.

In an obituary, the Birmingham Press Club’s Fred Bromwich wrote: “As a member of the British Guild of Agricultural Journalists, Gerry was a fierce champion of the farming community, the countryside and local produce – on occasions delivering Vale of Evesham asparagus to Buckingham Palace and top London food venues as part of the British Asparagus Festival.”

Gerry joined the Evesham Journal and Four Shires Advertiser in 1949 and stayed there until 1958, although this was interrupted by National Service with the Royal Air Force.

He then moved to the Echo and was also a well-known local stringer for many bigger news organisations further afield, where the name of B’arnett of Evesham’ was known in newsrooms at the Birmingham Post & Mail, BBC Midlands Today and ATV Today as well as by members of the Midlands pack of national reporters.

In 1993, Gerry rejoined the Journal staff and remained there until his eventual retirement.

When an exhibition was held in Evesham in 2010 to celebrate 150 years of news reporting by the Journal, a special section was devoted to Gerry who, by then, had worked as a journalist in the area for more than 60 years.

Gerry, a widower, lived in Ashton-under-Hill, near Evesham.

His funeral will take place at Ashton-under-Hill Chapel at 12.30pm on 30 May.