Famous figures have congratulated a regional daily on bringing the news to their area for 190 years.

Newcastle-based daily the Journal has celebrated its 190th anniversary, having been founded on 12 May 1832.

Celebrities from the North-East of England including former England footballer Alan Shearer and the Duke and Duchess of Northumberland are among those to have offered messages of congratulations as the newspaper marked the milestone.

The anniversary also featured on the front page of The Journal yesterday, pictured below. 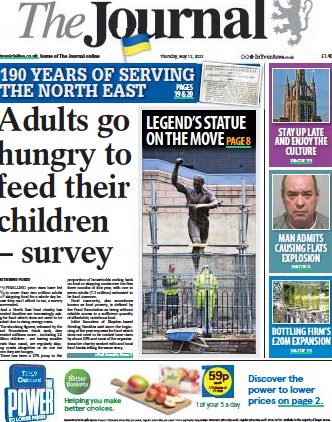 Mr Shearer said: “Congratulations to The Journal on reaching the ripe old age of 190.

“It’s a North East institution and I’ve always been especially appreciative of the support the paper has given to the charities I’m involved with, like the Alan Shearer Foundation and Sir Bobby Robson Foundation.

“And, of course, I’ve spoken with journalists from the sports section on a very regular basis.

“Hopefully The Journal will be celebrating many more big birthdays in the decades to come and I wish the team there all the best.”

In a joint statement, the Duke and Duchess added: “Reaching 190 years is an incredible achievement for any business.

“Whilst the landscape of how we obtain news has changed dramatically since The Journal was formed, the newspaper continues to play a vital role in championing local businesses, highlighting important local issues and celebrating the many positive stories that come from within our North East communities.

“Many congratulations to The Journal on its 190th anniversary.”

The Journal was set up by businessmen John Hernaman and Robert Perring at the request of local Tories to oppose Earl Grey’s Reform Act, which reformed Parliament and gave the vote to many more men than had previously been allowed.

In a piece looking back at the paper’s history, editor Graeme Whitfield wrote: “The North-East we serve has changed massively over the course of The Journal’s history and the newspaper has – in stark contrast to its original mission – been politically neutral for many years.

“But in many ways its mission is the same as that envisaged by Mr Hernaman and Mr Perring at its outset in 1832: to keep the people of Newcastle and the North-East informed and entertained, to champion the best interests of the region and to hold power to account.

“Not many institutions last 190 years and we have no intention of stopping any time soon.”