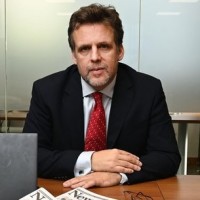 A regional daily has won a landmark two-and-a-half-year libel battle after a charity sued one of its reporters.

Paper Trail has failed in its legal case against the Belfast News Letter and journalist Adam Kula, with the organisation agreeing to pay a substantial sum towards the newspaper’s costs.

News Letter editor Ben Lowry, left, has welcomed the ruling, warning the case could have had a “chilling” effect on journalism due to Adam being named personally in the writ.

The claim was launched by Paper Trail after the News Letter ran a story headlined ‘McKee book to fund ex-bomber’s group’.

The story reported how proceeds from a book by Belfast Telegraph journalist Lyra McKee, who was killed that April while observing a riot in Derry, would be going to Paper Trail, prompting the paper to investigate the group.

The organisation billed itself as helping “ordinary families access official information buried in archives for decades”, with one of its six directors being an ex-IRA member and self-confessed former bomber called Robert McClenaghan.

Lawyers representing the other five directors of Paper Trail, plus the organisation’s secretary Ciaran MacAirt, subsequently launched legal action against the JPIMedia-owned daily, claiming their clients had been libelled by the story.

They claimed, among other things, it was defamatory to report that “the posthumous book by paramilitary murder victim Lyra McKee is helping to fund a group directed by a former IRA bomber”, adding the story’s publication misused personal data and constituted harassment as well as a breach of privacy.

In response, the News Letter’s lawyers said there was “nothing at all defamatory or otherwise unlawful” about the story and rejected the harassment and privacy claims, arguing the names of the directors and their professions are all publicly listed on Companies House.

Mr Justice Scoffield threw out two of the four claims at Belfast’s High Court in April last year, although he allowed the harassment claim and the misuse of personal data claim to stand.

At the same time though, the judge voiced “misgivings about the strength of the plaintiffs’ case” on the two surviving complaints.

However, the claimants have now agreed to pay the sum to the News Letter after trying to walk away from the case earlier this year.

The News Letter was represented throughout by HTFP media law columnist Tony Jaffa, of Jaffa Law, as well as barristers Gerry Simpson QC and Jonathan Scherbel-Ball.

Ben, pictured, said: “We were determined to fight this case, all the more so given that our reporter Adam Kula was named personally in the writ and the chilling effect that such a move could have on journalism.

“We are pleased that the case has been dropped and that Adam’s reportage has been vindicated on what was clearly a matter of public interest.”