A daily newspaper spoofed an all-time classic film in a front page attack on Boris Johnson.

The Daily Record dubbed the Prime Minister ‘The Godawful PM’ in a parody of 1972 gangster movie The Godfather, with the Glasgow-based paper portraying the PM as ‘Don Johnson’ in reference to Marlon Brando’s character Don Vito Corleone.

The idea for the splash came after Scottish Liberal Democrat MP Alistair Carmichael accused Downing Street of adopting the “tactics of the mafia” over claims by Tory MP William Wragg about threats made by Government whips over constituency funding.

Referring to Mr Johnson and paraphrasing a famous line of Corleone’s, the Record added: “He’ll make you an offer you should refuse.” 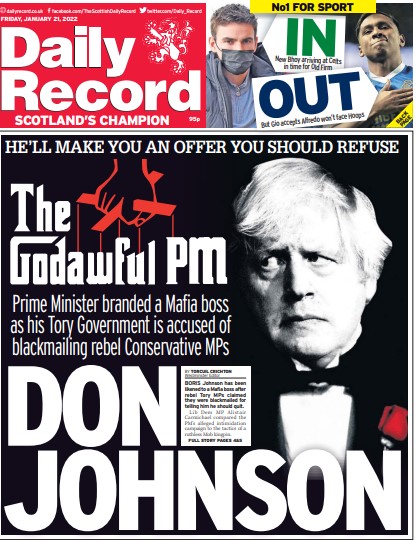 Record editor-in-chief David Dick told HTFP: “We are pretty fierce critics of this Tory government at the best of times and we rarely pass up an opportunity to let people know what we think of Boris Johnson.

“The mafia quote was a gift and once you have a line like that to work with the rest is just a case of doing it justice on the page. We discussed it in conference and I think we all instinctively knew what we would do with it.

“Sometimes these photoshop jobs can look a bit clunky but we have a brilliant design editor in Kevin Connor and once I rough up the general idea on Indesign I can hand it over to him and be confident he will turn it into gold.

“The Don Johnson headline just came to me and when I said it out loud everyone laughed so I thought I would use it because it was funny and made him look even more comical than usual.

“I don’t like to do that kind of front page too often because you lose any impact if it becomes just another one of those Daily Record front pages.

“The timing was good because we had a really good reaction to the front page we did last week on Johnson’s performance in parliament and we used the headline ‘Cock and Bull Tory’ which people seemed to like, so I was happy to keep rolling with that general theme.

“The Prime Minister is a bit of an easy target to be honest, because he almost makes it too easy. Still, I’m not about to cut him any slack.”

David said the reaction to the design had been “great”, with other Scottish editors emailing him about it. “The industry might have changed but we all still get a kick out of a great front page,” he added.

Mr Johnson said he has seen “no evidence to support” the claims made by Mr Wragg.

However his ally Michael Fabricant less-than-helpfully revealed that the practice was so commonplace that if he went to the police every time he had been threatened by a whip, there would be no time to conduct any other police work.