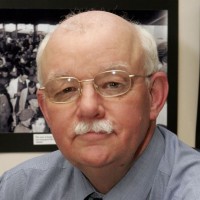 A regional daily news editor described as the “ultimate professional” has died aged 74.

Tributes have been paid to Steve Richards, who ran the Grimsby Telegraph’s newsdesk more than a decade.

Steve, pictured, served the Telegraph between 1974 and his retirement in 2006.

Michelle Lalor, who worked as a trainee reporter under Steve and later went on to edit the Telegraph, was among those who paid tribute.

Michelle told her old newspaper: “He was really batting on my side to get the job when I came on a three-month placement, as he did throughout the years.

“He supported so many people and you couldn’t fail to have respect for him, he was such a character and so knowledgeable.

“His pride when I came back as assistant editor and then editor was incredible, he was thrilled for me having given me that break.”

Steve was born in Barnsley and began his career on hometown weekly the Barnsley Chronicle in 1966 as a junior reporter.

He moved to the Telegraph eight years later, where he was known as ‘Bomber’ to colleagues, becoming news editor in 1990.

In the last few years of his career, Steve stepped down from the newsdesk to produce the nostalgia content for the paper.

Vince McDonagh, Steve’s predecessor as news editor, said: “I worked with Steve for many years and can say he was a journalist of the old kind who believed in honest, straight forward reporting, ensuring local people got the news that mattered.

“Steve mentored many of the Telegraph’s trainee journalists who went on to make their names in broadcasting and national newspapers. They will rightly be grateful to him.

“Sadly, his health had deteriorated in the last couple of years, but he will be remembered for his cheerful countenance and irrepressible Yorkshire humour.”

Brian Frith, the paper’s former picture editor, added: “Steve was the ultimate professional and also a great pal to share a few pints with after work in our favourite ‘local’ The Nottingham Hotel, Cleethorpes.”

After his retirement, Steve continued to contribute articles and – latterly – resort and local wildlife photographs to the Telegraph.

Steve, who died on 7 January, is survived by daughter Anna and grandchildren Beau and Evie.