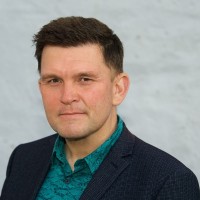 A regional TV presenter who was also a daily newspaper columnist has died aged 46 – prompting tributes from journalists at the title.

Gary Burgess, who wrote for the Jersey Evening Post, passed away on New Year’s Day, 14 months after receiving a terminal cancer diagnosis.

Gary, pictured, had served as a columnist on the JEP since July 2015 in addition to his main job as a presenter on ITV’s regional news programme for the Channel Islands.

Jersey Evening Post assistant editor Lucy Stephenson has been among those to pay tribute to Gary, who is survived by his husband Alan.

Posting on Twitter, Lucy wrote: “A true pleasure to have known you Gary. My thoughts are with Alan and all Gary’s family and friends.”

In an obituary, the JEP added it “extends its sympathy to Mr Burgess’s family and friends”.

Manchester-born Gary began his career in 1992 on Blackpool’s Radio Wave, where he served in roles including newsreader, breakfast show presenter and programme controller.

He later moved to Jersey, where he worked for radio station Channel 103, the BBC and ITV during his career.

Gary was first diagnosed with testicular cancer in 1999 but it was successfully treated at the time with chemotherapy.

He was diagnosed again in 2015 and underwent further treatment, only to receive a terminal diagnosis in November 2020.

HTFP reported in August last year how Gary had been threatened with legal action after being targeted by anti-vaccination activists on social media.

He received the threatening letter after extolling the benefits of Covid-19 vaccination in a column for the JEP.

Last year cancer charity Macmillan Jersey also named a room at its base in Gary’s honour after he requested that £33,625 raised for him through an online fundraiser was given to the organisation instead.

In a final message, written for release after his death, Gary said: “I’ve had the best life. I’ve had the luckiest life. I met my soul mate and the love of my life who went on to become my husband.

“I got to work with some of the most amazing people in newsrooms and studios doing the job I absolutely adore.

“And I’ve been able to share my own relatively short time on this planet surrounded by friends and loved ones who have enriched my life in ways they may never truly understand.

“My greatest sadness is the prospect of leaving all of that and all of them behind. The thought of doing that to Alan in unfathomable to process, but I also know the very people who’ve shown me love and support will now wrap those feelings around him in the coming days.

“It’s time for me to hand over my microphone and keyboard for others to do the talking about me, so let my final words simply be ‘thank you’.

“Every person in my life has, in their own way, helped me live my best life. That’ll do.”