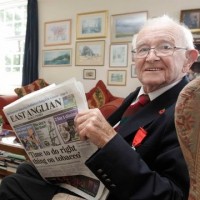 A war hero editor who ran a regional daily for 13 years has died aged 105.

Tributes have been paid to Tony Pyatt, who edited the Ipswich Star between 1965 and his retirement in 1978.

Tony, pictured on his 100th birthday, was also made a Chevalier of the Order of Légion d’Honneur for helping to liberate France in the Second World War after landing at Gold Beach on D-Day.

After his retirement from journalism, he travelled and worked with young journalists studying for the National Council for the Training of Journalists diploma.

Discussing his father’s later years, Tony’s son Andrew told the Star: “He’d come and stay with us, and the first thing he’d do was watch the news. We’d say, OK, dad, we’ll watch the 6 o’clock news. But then at 7 o’clock he’d want to watch it again.

“You learned not to give him your newspaper, because you couldn’t read it afterwards. The pages would be all over the place! It was like he was eating it, really.

“He lived and breathed newspapers.”

Tony began his career as an apprentice on the Wisbech Standard, before moving to the Surrey Weekly Press and then the Surrey County Herald.

He joined the Territorial Army in 1939, and was called up two weeks later to serve in the 48th Royal Tank Regiment.

In 1944, Tony landed with thousands of other British soldiers to secure the beachhead on Gold Beach during the Normandy landings.

After the war, he worked in Suffolk before moving to the Birmingham Post.

Tony then got a job with the Standard Triumph Motor Co, where he edited their newspaper, before being asked to return to the Evening Star as deputy editor in 1964.

He stepped up to the editor’s chair a year later.

Andrew said: “He was a very fine journalist. He would never be compromised.”

Tony and his wife Audrey, who died aged 77, had four children -Stephen, Andrew, Elizabeth and Vivienne.

He is survived by 13 grandchildren and 16 great-grandchildren, the latest of which was born on his 105th birthday, following his death on 23 January.