A long-serving correspondent held a one-man protest outside a newspaper’s office over a decision to cut its community news content.

David Fursdon held the demonstration outside the offices of the Northamptonshire Telegraph, in Kettering, after the weekly decided to end its ‘Down Your Way’ column, which featured content including community event listings.

David has contributed to the title, formerly the Evening Telegraph, about the village of Gretton for more than 30 years.

He is one of three correspondents affected by the change and has claimed there is “growing anger here by the public and readers”. 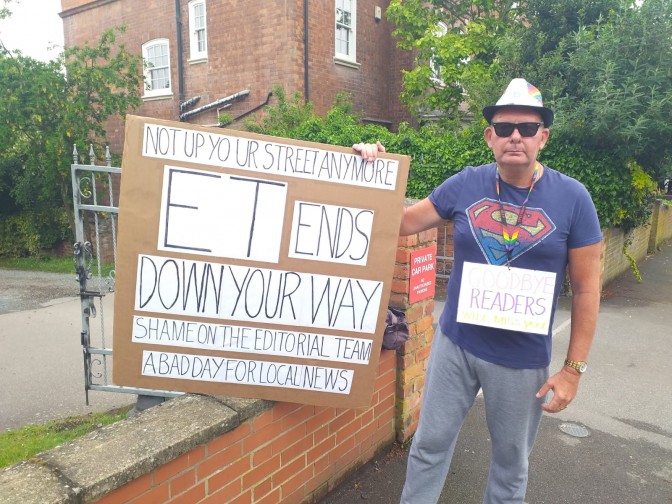 In response, the Telegraph has pledged to consider reinstating the feature if enough readers ask for it and has urged David to continue sending story ideas to its reporters.

Speaking after his protest on Thursday, David told HTFP: “[I am] saddened as are the many readers who will miss this section of the paper.

“It’s totally out of touch to end it and a shameful cut by the editorial team reducing community content.

“I am sorry to say the [Telegraph] is not up your street anymore.”

In a letter to David, Telegraph deputy editor Neil Burkett thanked him for his “valuable contributions over the years”.

He added: “We are always reviewing the content we publish and this situation will be no different; if enough readers ask for Down Your Way to be reinstated we will certainly consider doing so.

“This is not to say that we are not interested in village news anymore – if something is newsworthy we will always try to find room for it in the paper, so please do continue sending in your news. I know our reporters appreciate it.”