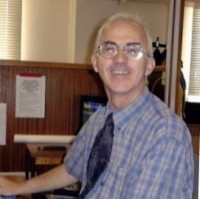 A Regional Press Awards winner who served a regional daily as its chief sub-editor has died aged 76.

Tributes have been paid to Tony Hyde, whose career on the Grimsby Telegraph sandwiched a three-year spell on Fleet Street.

Tony, pictured, was responsible for the Telegraph’s Regional Press Award-winning splash design following a tornado on the Humber Estuary in 2000.

He died in a care home on 27 January after living with dementia for a number of years.

“He was also a good leader on the subs table and, when I went over there to learn more about ‘casting off’, ‘word-counts’ and working out whether type would fit, Tony was the man.

“It wasn’t just in the newsroom he was popular, the lads in composing liked and respected him and he was often greeted by the call ‘Hi-de-Hyde!’

“He was a great lad, a great colleague and I’m sure he will be greatly missed.”

Tony began his career on the Telegraph as a trainee in the 1960s, later becoming a member of the sub-editing team.

He left in 1979 to join the Daily Express and Daily Star before returning to Grimsby three years later and being appointed chief sub.

Former colleague Dave White said: “You don’t get to work for the Daily Express or be chief sub-editor of an evening paper unless you’re on top of the job.

““Chief sub is a vital post, responsible not just for designing key pages but also for making sure the workflow enables all other pages to hit their deadline throughout the paper’s various editions.

Tony was married to Kath, who died last August, for 25 years before divorcing.

His funeral will be held at Grimsby Crematorium at midday on Friday 25 February followed by a celebration of his life at the Coach House in Humberston, Lincolnshire.