A weekly newspaper has won a courtroom battle to name a “cruel” father who broke his baby daughter’s leg and inflicted injuries that left her unable to talk properly.

The Kentish Gazette and its sister news website Kent Online won the right to identify Daniel Baker after he was jailed for an attack on his daughter, during which he also pushed a dummy into her mouth so hard it snapped a fold of skin tissue beneath her tongue.

Judge Mark Weekes had initially ruled against the media publishing any identifying features of the two-month-old baby, meaning the KM Group-owned titles were unable to report that 24-year-old Baker had harmed his own child.

But court reporter Sean Axtell challenged the ruling, made under Section 45 of the Youth Justice and Criminal Evidence Act, on a number of points, highlighting the importance of open justice. 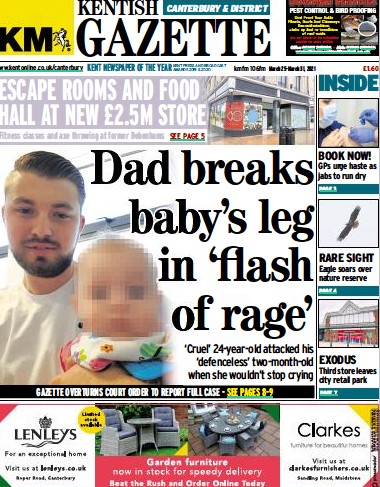 The Gazette splashed on the case on thursday

Sean argued the ruling made it near-impossible to report the facts of the case, therefore protecting the defendant more than his victim.

He cited the Judicial College’s own guidance that “age alone is not sufficient to justify imposing an order as very young children cannot be harmed by publicity of which they will be unaware.”

In a formal challenge to the judge at Canterbury Crown Court, which was opposed by Baker’s lawyer, he also cited a 2013 High Court ruling in favour of the press in a case that loosely resembled Baker’s.

In a 2,000-word ruling, Judge Weekes decided the baby could be identified all but in name, to protect her in the future, and to ensure open justice would prevail and Baker’s identity be known.

“But in some cases, they can inadvertently serve the interests of defendants, such as Baker, who have committed the most heinous of crimes.

“We’re glad the judge agreed that the principle of open justice outweighed the likelihood of this young child being affected by any publicity of the case, allowing us to report what Baker had done to his own, defenceless baby.”

The court heard Baker had pulled his daughter across a sofa by her leg at their Canterbury home, “forcefully twisting” it and fracturing her shin in two places.

He then her mouth a bloody mess after violently inserting the dummy, breaking the little girl’s frenulum – a thin strip of tissue connecting the mouth and tongue.

Baker had pleaded guilty to wounding and actual bodily harm when he appeared before Folkestone magistrates in September.

On Friday, he was jailed for one year for what Judge Weekes described to the court as the “cruel and shocking mistreatment of a tiny, defenceless baby” in March 2018.

Phil Rowley, defending, told the court Baker had scored an “extremely low IQ score”, impairing his decision-making skills and ability to understand the impact of his actions at the time, accompanied with autism.

He said his client, who has no previous convictions, felt “devastated and ashamed” by his actions, which he claimed were out of character.