A weekly newspaper has launched a campaign to make its patch into a city after announcing it has split into two separate editions.

The MK Citizen is calling on Milton Keynes Council to make a fourth bid to turn the town into an official city – after previous unsuccessful attempts in 2000, 2002 and 2012.

It is predicted one or more towns will be bestowed with the status by the Queen to mark her Platinum Jubilee in June 2022.

The campaign’s launch came as the Citizen rebranded as a paid-for title called MK Citizen ‘Extra’, featuring an additional 24 pages of content. 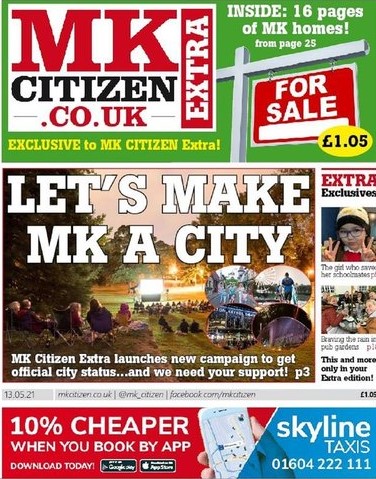 The new-look title includes a fresh 16-page property section and a leisure guide called ‘Go’, among other features.

A free edition, MK Citizen ‘Lite’, will still be delivered to selected homes across Milton Keynes.

The move comes after fellow JPIMedia titles the News Post Leader, in Northumberland, and the Brighton & Hove Independent, made the switch from free to paid-for title recently.

Editor Damien Lucas said: “We are very excited to launch the new edition of the MK Citizen.

“There is a feeling of optimism and excitement across the city as the lockdown restrictions ease and more and more businesses, restaurants, pubs and entertainment venues reopen.

“As the local newspaper and website for MK, we have been backing business throughout the pandemic and giving them support and publicity as they battled for survival and now look to grow.

“What better way to do this than to launch a bigger, better MK Citizen that gives our readers more of the things they love about Milton Keynes.”