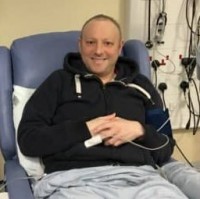 A former regional press deputy editor who went on to a top job with ITV News has died aged 52.

Tributes have been paid to Geoff Hill, who was second in command at the Southwark News before moving into broadcasting.

After seven further years there he went on to roles including editor of Setanta Sports News, director of coverage at CNN, and editor of Channel 5 News.

Geoff returned to ITV News as editor in 2013 but was diagnosed with leukaemia four years later.

He had planned to return to work last year prior to a relapse, which prompted him to step down from his role permanently.

His wife Nat, who also works for ITV News, told the channel: “I’m sure many of you will join me and his family in being beyond devastated that he has left this world.

“For what a life he led, and what an impact he made.

She said: “Geoff loved ITN and everything good it stands for and was fiercely proud to be named Editor of ITV News. He once said it was ‘the proudest moment of my entire working life’.

“He led from the front, with guts and raw energy. His enthusiasm was limitless because he just loved his job. He came to work every day with a big smile on this face.

“He was a force of nature and loved nothing more than to be at the heart of the barely controlled chaos of a breaking news story. He was fizzing with ideas, a human dynamo always ready for action.

“His passion was infectious, which was what made him a great programme maker and an exceptional leader.”

ITV News editor Rachel Corp added: “Geoff was so much a part of this newsroom and in so many of our lives for so long, and even over the last few years when he hasn’t always been with us in the newsroom, we’ve always felt his presence, as a friend, a colleague, an inspiration to us all.

“For me, whenever I think of Geoff it’s with a huge smile on his face, in the middle of it all, loving the thrill and pace of the day, always excited about what story was breaking, how we were going to get the inside track, the triumph after a brilliant programme.

“He also always cared deeply about his team, all of us in it together, being the best.”

Geoff is survived by Nat and children Emily, Olivia and Alfie.