The websites of three local newspapers have been absorbed by that of their sister title.

The Berwick Advertiser, Morpeth Herald and News Post Leader now no longer have their own dedicated sites, with  readers instead being redirected to the Northumberland Gazette’s online channel.

The move does not affect the newspapers themselves, with a message on the Herald’s Facebook page stating it will still be available in print every Thursday.

Publisher JPIMedia has declined to comment on the move. 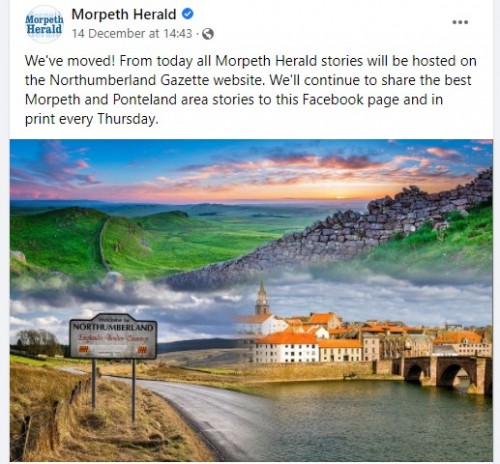 the message appeared on the Morpeth Herald’s Facebook page

The message on the Herald’s page reads: “We’ve moved. From today all Morpeth Herald stories will be hosted on the Northumberland Gazette website.

“We’ll continue to share the best Morpeth and Ponteland area stories to this Facebook page and in print every Thursday.”

The News Post Leader, which covers South-East Northumberland, underwent a relaunch earlier this year, switching from a free to a paid-for title in print.

HTFP reported last month how JPIMedia had closed the websites of the Belper News, Ilkeston Advertiser and Ripley & Heanor News, with the Derbyshire Times absorbing their platforms.

The three weeklies in Derbyshire were among 14 JPIMedia news titles to lose their own standalone print editions in September last year.