Three sister weeklies have urged women who are the victims of violence to come forward after uncovering the “horrific” scale of the problem across the county they serve.

The Northamptonshire Telegraph, Daventry Express and Northampton Chronicle & Echo have all run a special report which found 64 Northamptonshire men were convicted of committing violence against women in September alone.

Telegraph reporter Kate Cronin, who conducted the investigation, told HTFP she hopes the findings will encourage more women to be “brave enough” to report their attackers. 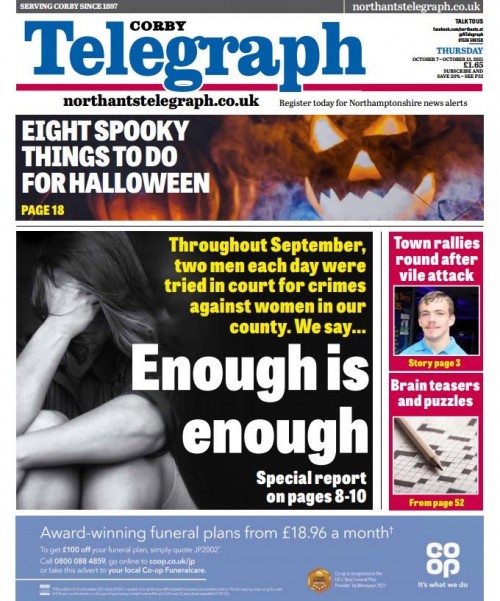 The Telegraph and the Express splashed on the investigation

Kate said: “I’ve covered courts for nearly twenty years and have always been horrified at the scale of violence against women but there has never been an easy way to collate any real figures because of the way crime is recorded.

“It took many hours to comb through the court lists for an entire month and because crown court results are not routinely published we won’t have captured all those found guilty.

“I think providing a snapshot of incidents in this way is important because it gives perpetrators of this kind of crime nowhere to hide. You cannot argue with immutable facts.

She added: “Last month in our county, 64 men decided to hurt a woman. This is not an unusual month, or any kind of outlier and it’s not something that the public authorities and lawmakers can ignore.

“As a society, we can no longer claim to be surprised when women say they don’t feel safe just going about their day-to-day lives.

“Ultimately we really hope that women and girls will see that if they are the victim of such a crime, there is a point in coming forward, they will be listened to, and these cases do get to court.

“The more women that are brave enough to report their attackers, the more spotlight we can shine on these sorts of crimes, and the more pressure we can put on the authorities to act.”