Regional journalists have vowed not to doorknock neighbours affected by a spree shooting that left six people dead.

Reporters working for Plymouth daily The Herald and its Plymouth Live sister website say they will not take part in the practice in the Keyham area of the city following Thursday’s night’s tragedy.

Five victims were shot dead by gunman Jake Davison, who then turned the weapon on himself.

In a Twitter post yesterday evening, Herald crime reporter Carl Eve pledged to give people in the Keyham area “time and space” after the killings. 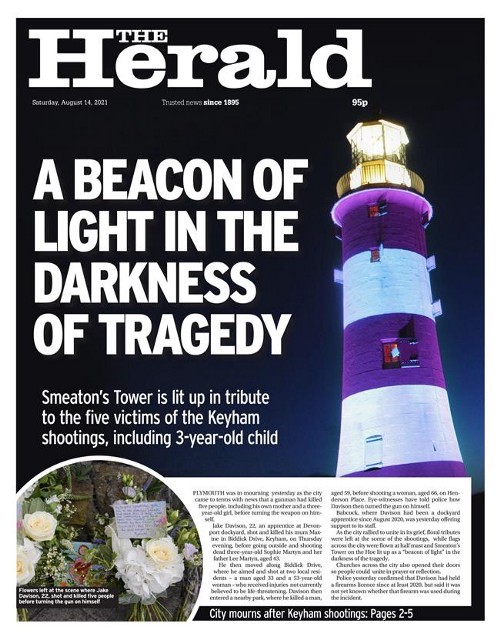 How The Herald paid tribute to the victims on Saturday

He wrote: “The police cordons are down at Henderson Place/Biddick Road

“Any reporter at your door tonight is not from Plymouth Live.

“You need time and space to process this. If you want to speak to us later, we’ll be here to listen to you.”

Plymouth Live digital editor Edd Moore added: “We stand with our friends, neighbours and relatives affected by the event events in our city. We won’t intrude.

“As Carl says, if a reporter knocks your door tonight they’re not from Plymouth Live.”

A fundraiser set up by the website to support the families of the victims raised £20,000 over the course of the weekend.

The campaign is being run with Jeremiah’s Journey, a charity that provides free support to children, young people and their families who have experienced death.

Speaking to HTFP, Edd said: “The city of Plymouth is grieving together. Our journalists stand with all our friends, neighbours and relatives affected by the awful events in Keyham.

“For us, this is not a news story, it’s a tragedy that has deeply shocked everybody in our great city.

“While we will of course continue to cover the incident comprehensively, we will do so with the compassion and respect the community deserves and we will allow people the space to grieve.

“We’ve been touched by the incredible response to our fundraiser for Jeremiah’s Journey and by the wider outpouring of support for those affected from across the city and beyond.

“Our thoughts remain solely with the victims and their loved ones.”

The fundraising page can be found here.