Sub-editor dies aged 77 after predicting coronavirus would kill him 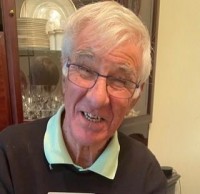 A sub-editor who predicted coronavirus would kill him has died from the disease at the age of 77.

Tributes have been paid to John Hodge, pictured, who served North Wales Newspapers for 35 years.

Initially a printer, John later switched to become a sub-editor at the group.

He had suffered from cancer for 12 years – the same illness which killed his daughter Paula in 2018 – and died after contracting Covid-19.

John’s son Richard told North Wales daily The Leader: “Dad had cancer for 12 years and fought it like a trooper. He never wanted to leave mum as he knew she’d be useless without him.

“He went for treatment at the hospital and unfortunately caught Covid.

“He’ll be a sorely missed part of the community, the family and his large group of friends that he has accumulated over the last 77 years.”

As well as Richard, John is survived by his wife Helen and Paula’s son William.

Another daughter, Joanne, drowned in a “terrible accident” in 1975 at the age of seven.

Former NWN news editor Steve Rogers, who worked with him for more than 20 years, said: “He was always a man who wasn’t afraid to speak his mind.

“He was a strong character and a bit of a workaholic who never shied away from the long hours.

“John switched from a printer to sub-editing when the company moved to on-screen and he managed to make a success in what was a difficult change in career but he managed to pull it off.”

Due to current Welsh Covid-19 restrictions, a private funeral service will take place on Thursday at Wrexham’s Pentrebycham Crematorium and then the Bridge End Inn, in nearby Ruabon.

Donations will be made to the Shooting Star Cancer Support.