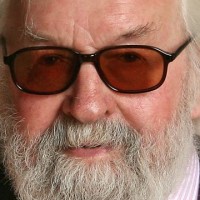 A sports journalist who wrote for a regional daily into old age and once covered matches from a ladder after a club ban has died aged 87.

Roy Webster covered football and fishing for the Eastern Daily Press and its sister papers across more than 50 years and was still doing so until “well into his 80s”.

In 2004, at the age of 71, Roy’s Wroxham Football Club reports gained “worldwide fame”, according to the EDP, when he was banned from the ground by the club after a disagreement.

He continued to collate his reports from the top of a ladder in a friend’s garden next to the ground until the dispute was resolved more than 200 days later.

The ban and subsequent resolution was covered by HTFP at the time.

Roy, pictured, had been a talented footballer in his youth and was offered a trial with Notts County.

He also played RAF Representative football in the 1950s, where he was the only team member on National Service.

Roy is survived by wife Patsy, children Gay, Will, Tom, Charlie, and Kim, and 10 grandchildren.

A private family-only funeral will be held on a date to be arranged.