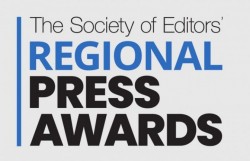 The Society of Editors has revealed the new date of the Regional Press Awards.

The honours for 2020 will be given out on 16 September this year in a virtual ceremony.

The awards were originally scheduled to be held in late May, but the Society announced their postponement in March.

The move followed the departure of the SoE’s executive director Ian Murray, after criticism over the organisation’s response to the Duke and Duchess of Sussex’s recent television interview.

Submissions for the awards can be made until 1 June.

In a statement, the SoE said: “New dates for the industry’s awards celebrating the best of national and regional journalism have been set.

“Winners will be announced in virtual ceremonies, with further details to follow in due course.”