Regional sister titles are demanding a change in the law to get seatbelts fitted on school buses.

The Lincolnshire Echo and Lincolnshire Live have launched the ‘Seatbelts for Schools’ campaign after covering a school bus crash which resulted in a 12-year-old boy breaking his arm and a 14-year-old girl being taken to hospital.

At present, “urban buses” – those defined as “a bus designed for urban use with standing passengers” – are exempt from having to be fitted with seatbelts.

But the Reach plc titles are now urging the UK Government to remove the “urban bus” exemption for school travel and cover all associated costs to fit such vehicles with seatbelts. 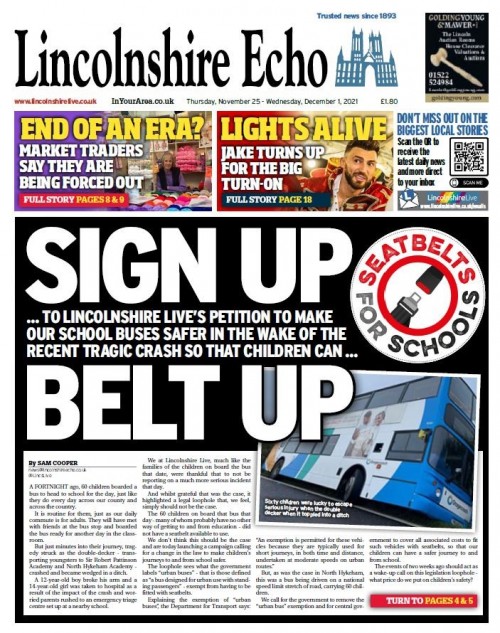 The campaign’s launch provided a splash for the Echo yesterday, pictured above.

An editorial launching the campaign states: “We at Lincolnshire Live, much like the families of the children on board the bus that date, were thankful to not be reporting on a much more serious incident that day.

“And whilst grateful that was the case, it highlighted a legal loophole that, we feel, simply should not be the case.

“The 60 children on board that bus that day – many of whom probably have no other way of getting to and from education – did not have a seatbelt available to use.

“We don’t think this should be the case and are today launching a campaign calling for a change in the law to make children’s journeys to and from school safer.”

The bus involved in the crash was being driven on a national speed limit stretch of road in North Hykeham, Lincolnshire.

The editorial adds: “We call for the government to remove the ‘urban bus’ exemption and for central government to cover all associated costs to fit such vehicles with seatbelts, so that our children can have a safer journey to and from school.

“The events of two weeks ago should act as a wake-up call on this legislation loophole – what price do we put on children’s safety?”