A journalist who served as a soldier in Afghanistan after working as a reporter there has shared his sadness at the country’s “collapse into anarchy”.

Stephen Stewart, of Dundee daily The Courier, first visited Afghanistan as an embedded news reporter with the Black Watch in 2009.

Describing the experience as a “life changer”, Stephen then signed up to the Army Reserves for basic training before eventually joining a regular Army battalion to serve on the frontline at OP Dara, the most remote British base there in 2013.

During his time serving, Stephen’s friend and two of his comrades were killed in a “massive improvised explosive device blast”. 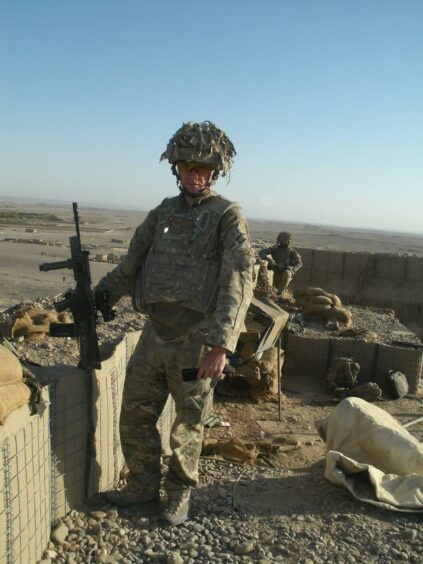 He has now given his thoughts on the situation in Afghanistan in a column for the title, after conducting a special investigation into ‘Scotland’s Forgotten War’ last month.

Stephen spent a number of weeks on the project, speaking to the families of soldiers from our areas who lost their lives in the conflict.

In his latest piece, Stephen, pictured, wrote: “Afghanistan’s collapse into anarchy and the Taliban’s swift seizure of power has grabbed headlines, triggered horrific news footage and shocked the world.

“It doesn’t surprise me though.

“For me, and many of the thousands of other Scottish soldiers who served there, it all has a sad air of inevitability.”

Stephen went on to note the “British mission seemed muddled from the start”.

He added: “It is deeply sad that so many died but our troops can hold their heads high.

“The top brass and politicians, not so much.

There was a sense back then that we were in Afghanistan because Britain, as usual, had followed blindly in the US’s footsteps. The junior partner in the so-called special relationship.

“Now I wonder if the UK Government will fulfil its moral responsibility and let Afghans settle here?

“Personally, I can’t see Boris Johnson and his colleagues changing tack and suddenly saying thousands of refugees and asylum seekers are welcome.

“But failure to do so will truly be a shameful act.”