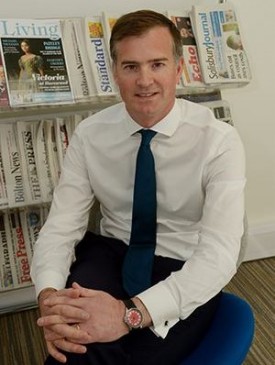 The chief executive of regional publishing group Newsquest has been awarded the MBE in the Queen’s Birthday Honours List.

Henry has been CEO of Newsquest since 2014 and is currently the chairman of industry body the News Media Association, which represents local and national news publishers.

He has worked in the local news industry for almost 20 years, having previously been digital director for Johnston Press and general manager of The Scotsman Publications.

Said Henry: “It’s an absolute honour to receive this award but the real recognition should go to the amazing people that work in local news publishing across the UK.

“It is their news brands that not only provide their communities with essential trusted news but also provide such valuable support in championing charities and promoting local businesses.”

Newsquest publishes more than 150 local newspapers and websites across the UK and reaches over 40 million online users per month.