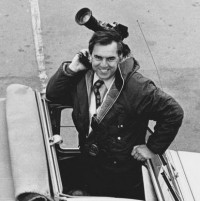 A regional press photographer who also worked as a BBC cameraman has died aged 84.

Tributes have been paid to Les Leach, who served titles including Gloucester newspaper The Citizen, the Western Daily Press and the Gloucestershire Gazette.

Les, pictured, was initially an amateur photographer but turned professional after winning a camera in a competition won by Midlands television company ATV.

He started taking still photos for local papers and then moved into television.

His son Mark, who followed in his father’s footsteps and is now a cameraman for BBC Points West, told Gloucestershire Live: “I have plenty of fond memories of him just being dad and always being around, and working with him for 15-16 years as a two-man crew.

“Some of the snappers at the funeral were his age, others are of the younger generation – he spans quite a wide age gap of friends.

“Everyone says he was a legend.‘He was Mr BBC’, ‘He was the best reporter the BBC ever had’, because he was always first on a lot of the fires and accidents and things like that.”

Les, who retired in 2001, died on 7 June at Gloucestershire Royal Hospital after a short illness.

He is survived by his wife Daphne, sons Mark and Ian, his three grandchildren and a great-grandchild.