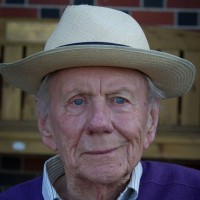 A regional sports journalist who turned down Fleet Street and became the “doyen” of  regional cricket writers has died aged 92.

Tributes have been paid to David Foot, who spent his entire career in the West of England working for titles including the Western Gazette, Bristol Evening World and Western Daily Press.

David, pictured, was best known for covering Gloucestershire and Somerset during the cricket seasons, and well as Bristol City and Bristol Rovers during the football season.

He was also known for his ‘Where Are They Now?’ column on former sporting stars from the West for the Bristol-based WDP.

Mark Easterbrook, sports production editor for the Bristol Post, told his newspaper: “I knew David for 30 years and was fortunate to share a press box with him at cricket matches on countless occasions.

“As well as being a mighty fine writer, the lovely thing about ‘Footie’ was his warm, generous personality.

“Everyone enjoyed his company in the press box and members of the public would often pop their heads around the press-box door to ask ‘Is David here today?’, such was his popularity.

“He had a great sense of humour, and you had to marvel at how he would often deliver such excellent copy from minimal notes. Maybe that was because, as he would say, he was not particularly interested in stats. He preferred to put his focus on the personalities involved in the match.”

“He was a doyen of cricket writers, whose books on the sport he so loved, have captivated countless readers over the years. The depth of his research, allied to his humour and turn of phrase, made each one a gem.

“I was lost in admiration for his skills as a journalist, covering Bristol football as well as cricket, and as a prolific author.

“But above all, I delighted in his company, whether in press boxes or over a pint of beer, which he always insisted be served in a glass with a handle. David was simply unique and great fun to be with.”

‘Footie’, as he was known to friends and work colleagues, was born in the Somerset village of East Coker and grew up in the Yeovil area.

He began his career with the Western Gazette in Yeovil where, in 1945, the 16-year-old secured a position as a trainee copy boy.

David later moved to the Bristol Evening World prior to its closure in 1961, at which point he was courted by Fleet Street.

Instead, he turned freelance, a status he maintained for the rest of his working life.

Bristol sports journalist Graham Russell, himself 92, said: “I was already freelancing when David came up from Yeovil to join the old Evening World in the 1960s.

“There could be no more cordial way of spending time in a press box than in the company of my dear friend. He was always the better writer, but I never let on.”

David is survived by his wife Anne, son Mark and journalist daughter Julia.