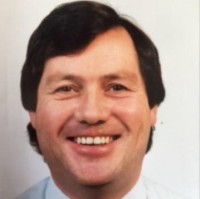 A regional press journalist who went on to cover the Birmingham pub bombings for local radio has died aged 74.

Stewart Woodcock worked on the Wilts and Gloucestershire Standard and West Oxfordshire Standard during a career that included a long association with the BBC.

Stewart, pictured, later worked for BBC Radio Oxford and BBC Radio Birmingham, according to an obituary published in the Oxford Mail.

He was appointed news editor at Radio Birmingham in 1970 and was in the role when the bombings took place in November 1974, recalling hearing a “deep boom” in the distance followed by a phone call telling him to get into the city.

Born in Crook, County Durham, Stewart’s family moved to Witney, Oxfordshire, and he initially worked as a trainee in the Midland Bank after leaving school.

He then switched careers and became a trainee reporter with the Wilts and Gloucestershire Standard, moving back to Witney when the West Oxfordshire Standard was started.

Later he joined Colin Fenton’s Oxford News Agency, which had been appointed to supply news to the newly opened BBC Radio Oxford in 1970.

After his time in Birmingham, he returned to become programme organiser at Radio Oxford shortly after the birth of his son Simon in 1982.

In 1993 he left the BBC and started a media consultancy company called Media Matters.

Ten years ago Stewart was diagnosed with mouth cancer, which resulted in a major operation and radiotherapy.

He died on 9 April after suffering from chronic obstructive pulmonary disease for several years.

Stewart is survived by Jean Hodgson, who was his partner for 25 years, his son Simon and granddaughter Polly.