Regional daily slams Starmer over decision to write for The Sun

The Liverpool Echo has hit out at Sir Keir Starmer over his decision to publish a first-person piece in The Sun.

The regional daily has criticised the Labour leader after he wrote a piece for the national tabloid, which is widely boycotted across Liverpool over its coverage of the 1989 Hillsborough disaster.

The Echo, which refers to the title as “The S*n” in its copy, has won multiple awards for its campaigning work with the families of Hillsborough survivors over the past three decades.

Its criticism of Sir Keir, on which it splashed yesterday, came after he previously declined to give interviews to The Sun during the course of his campaign for the Labour leadership. 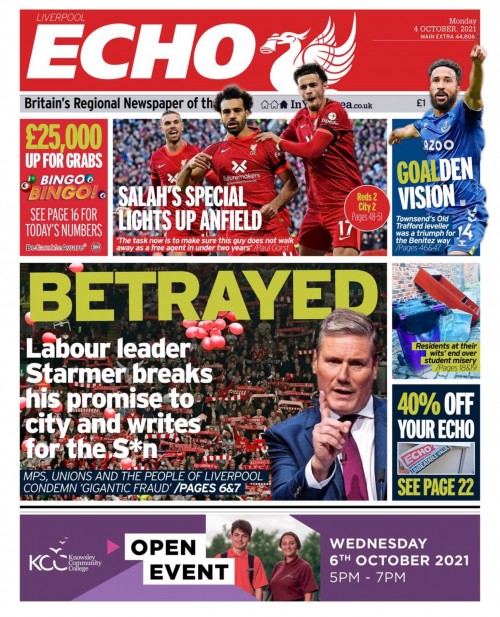 In his opinion piece for the tabloid, published at the weekend, Sir Keir criticised Prime Minister Boris Johnson’s “incompetence” over the ongoing fuel crisis.

But his choice of platform has sparked what the Echo has called “shock and anger” on its patch, including from a number of Merseyside Labour MPs.

Echo reporter Joe Thomas, who covered the criminal trials linked to the Hillsborough tragedy and its aftermath, wrote in an accompanying first-person piece: “Merseyside has woken to the news that he has written an article specifically for the paper still reviled in the region for its poisonous coverage of the Hillsborough tragedy, including the reporting of disgraceful smears that took decades to dismantle but continue to be weaponised, agonisingly, by vile trolls.

“While [Sir Keir] said he would reconsider his position in relation to The Sun should he become leader of the party, his collaboration today has, unsurprisingly and understandably, caused shock and anger on the banks of the Mersey.”

Joe added: “When [Sir Keir] stood on a stage in this great city and vowed not to speak with The Sun during his leadership campaign he was content to receive the support that followed. Now that he is leader he may argue he is involved in a different campaign that requires a different approach.

“Yet if this is a calculated political gamble it is one that, to many on Merseyside, renders his past words hollow and creates the sense that it is the support of this Labour stronghold that he is willing to risk in his pursuit of power.

“[Sir Keir] appeared happy to play to his audience when he wanted Liverpool votes in his bid to become Labour leader. Today, many will feel he is just the latest establishment figure apparently willing to sacrifice the city when it suits his ambitions.”

The Hillsborough tragedy has now claimed the lives of 97 Liverpool Football Club supporters after the death of Andrew Devine in August 2021, 32 years after he was injured in a crush at Hillsborough stadium, in Sheffield.

A coroner concluded Mr Devine was the disaster’s “97th fatality” and he was unlawfully killed.

HTFP has approached the Labour Party for a comment on the Echo’s criticism of Sir Keir.