Readers want a regional daily to be “less tabloid” in tone, according to its former deputy editor.

Richard Prest has revealed findings from recent research conducted with readers of the Aberdeen Evening Express, which has also found they want the newspaper to be “more thoughtful”.

Richard is now head of content development at Evening Express owner DC Thomson and has pledged to “try and deliver” on the survey’s results.

He spoke out about the research in a column for the Evening Express in which he recalled previous campaigns fought by the newspaper. 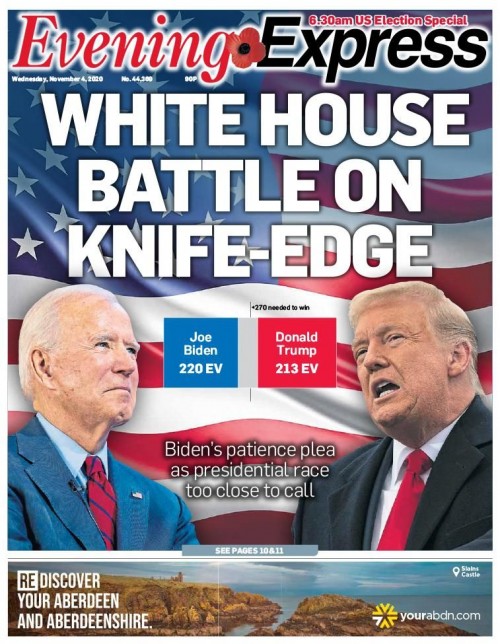 How the Evening Express covered last year’s US presidential election

This included opposing Aberdeenshire Council’s decision to reject Donald Trump’s plan for a golf resort in the county 15 years ago after the Evening Express “took the temperature of its readers and found they were massively in favour of the plan going ahead”.

In his column, Richard wrote: “Any claim that [the Evening Express] did so because it was being swayed by big business or other matters is wrong.

“Its readers had expressed their feelings on the matter and the newspaper acted accordingly.

“I should know. I was deputy editor at the time.”

Richard went on to note “the public and the media have both changed” in the 15 years since the decision.

He added: “Our own most recent research shows our audiences still want our titles to fight for the North-East but they also want a better understanding of the ‘other side’ and why it might hold a contrary view.

“They also want a change in tone: less tabloid and more thoughtful.

“They have expressed their views and that is what we will try to deliver.”