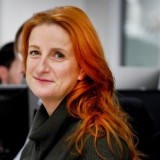 Regional publishers have been urged to follow Reach plc’s lead in committing to making at least 30pc of its senior managers being women.

Reach announced earlier this month that it was pledging to reach the target in both senior management and at boardroom level by 2023.

The move means it is now part of the 30% Club, a campaign group that aims to get companies to commit to gender balance on boards and in senior management.

Now Daily Mirror editor-in-chief Alison Phillips, pictured, has vowed to put pressure on other publishers to do the same in her role as chair of campaign group Women in Journalism.

Speaking to The Drum, Alison said: “Thirty per cent by 2023 seems like a great place to start for every organisation working to improve its gender diversity – it’s clear, it’s achievable and we hope it triggers a natural momentum for continued improvement.

“While I know there’s still lots of work to do, I’m thrilled that Reach has taken this important step and made their target public.

“The targets around ethnic diversity are also crucial as I don’t think you can truly separate these goals.

“Over the next few month, WIJ and its members will be calling on other news publishers to join Reach in making this pledge.”

“While we still have a lot of work to do, I’ve been really encouraged by the enthusiasm and commitment across Reach to become a more inclusive workplace.

“Focusing on a clear target can do wonders for motivating people to achieve a goal and we’re confident we can achieve these aims – the will is there and now the framework and support is there too.”