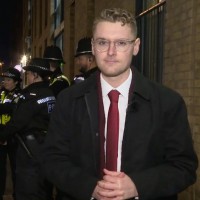 The world’s oldest press club has recruited a new board member as part of its push to attract young journalists.

George Hancorn, who worked as a video journalist for JPIMedia before joining ITV Central in June this year, has been appointed to the board of the Birmingham Press Club.

George, pictured, is already chief organiser of the club’s recently-established Young Journalists Network, which is open to young and aspiring journalists as well as media and communications professionals.

The group’s events offer the opportunity for like-minded people who are starting their careers in the media industry to discuss sector issues and how best to embrace new media.

George said: “I’m delighted to join the board of the oldest press club in the world.

“There’s some really exciting talent in this wonderful city and I can’t wait to get started in this new role.”

Press Club chairman Llewela Bailey added: “His appointment will provide a useful link in helping the club to engage more fully with next-generation journalists such as media students and those young journalists who have already embarked upon their careers.”