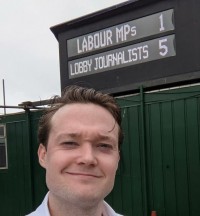 A political journalist has opened up on anti-Semitism he has faced through his work – including being manhandled by a political party staff member.

Alexander Brown, who is The Scotsman’s Westminster correspondent, has spoken out about a Conservative Party staffer grabbing his jaw and checking his nose to “judge my Jewishness”.

He has gone public about the incident in a column for The Scotsman’s JPIMedia sister title Scotland on Sunday in which he discussed other incidents of anti-Semitism he has faced during his life.

Alexander, who worked for The Sun and the Daily Star before joining The Scotsman last year, had “been working in Parliament a matter of days” when the incident with the Tory aide happened.

He wrote: “Going for drinks and desperate to build contacts, a staffer had asked about my background, and I’d shared I studied an MA in Jewish history.

“Before I’d even finished speaking she had grabbed my jaw, tilted my head to the side to look at my nose and spat out ‘you don’t look Jewish’.

“Her friends told me not to report it, stressing I was new and they could be useful.

“This was a Tory staffer grabbing me in public to judge my Jewishness, at a time it was supposedly only the Labour Party that had a problem.”

Alexander, pictured, also revealed in the column how the anti-Semitism he has faced during his life had brought him closer to the Jewish faith of his maternal grandparents.

He recalled how the word “Jew” had “managed to exist as a slur among my peers” and an occasion on which his mother had cried following an incident with a computer repairman who had questioned why he would want to study Jewish history.

Alexander added: “Throughout my studies and the texts I read the theme was always remember what happened, and be proud of who you are despite everything.

“And I feel that weight, I carry that defiance, yet feel guilty as if I have no right to it. The late, great Rabbi Sacks once said Judaism was about ‘belonging without believing’.

Speaking to HTFP, Alexander said: “I was worried the column could seem too self-involved, or look to be claiming an identity or trauma that is not mine.

“However I’ve been blown away by the response, which has been overwhelmingly positive.

“I’ve had lots of lovely replies and messages, including from those sharing their own stories.

“It’s wonderful to think I can write something and anyone cares, let alone enough to open up themselves.”