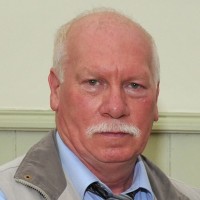 A former regional press photographer has opened up on the childhood abuse he suffered after his mother’s suicide.

Peter Foster, pictured, has gone public on the “ghosts of the past” which saw him endure daily squalor in a freezing old car with his alcoholic father, starvation, physical abuse and bullying.

Peter’s life had changed after his mother died by suicide on New Year’s Day 1965, and he was subsequently moved to a care home where life became “even tougher”.

He later became chief photographer and a regional photojournalist in Dumfries and Galloway for more than 20 years before retiring in 2016 and has now revealed his past in his autobiographical story Staring Into Water.

The book has been edited and published by Peter’s former editor at the Galloway Gazette Nic Outterside, who is now an author and has previously opened up on his own experience as the victim of childhood sex abuse.

Peter, 70, said: “Growing up in the 1960s was a very different experience from what it is today. Children had no voice and life was what it was – we just accepted and got on with things.

“My story has been a source of self-torment for over 50 years.

“It’s a story I know should be shared with more people, and now with the help of my good friend Nic Outterside, that story has come full circle as my true account of those four turbulent years, the guilt of the children’s home and ghosts of the past, have finally been put to rest.”

Nic, who has known his “good friend” Peter for 23 years, said: “I knew absolutely nothing about his childhood. It was like a secret he carried around inside him.

“It was only when he sent me the first draft of his book 18 months ago that an ‘oh my God’ sensation swept over me. And I knew immediately that it was a story that had to be told to a much wider audience.”

Staring Into Water is available as a paperback from Amazon global portals priced £8.99.