PA has won a High Court fight to stop press cards being issued in its name to “citizen journalists”.

The national news agency for the UK and Ireland has obtained an injunction to stop the issue of the items after taking legal action against the Workers of England Union, which was charging its members £120 for an ID card claiming the holder was a member of “the English Press Association”.

The High Court heard at a remote hearing today the cards were “instruments of deception” which allowed WEU members to “misrepresent themselves as being affiliated with or employed by PA”.

David Ivison, representing PA, claimed in court the WEU’s press cards were “essentially a ‘fake ID’… which already seem to be sowing confusion among the public”. 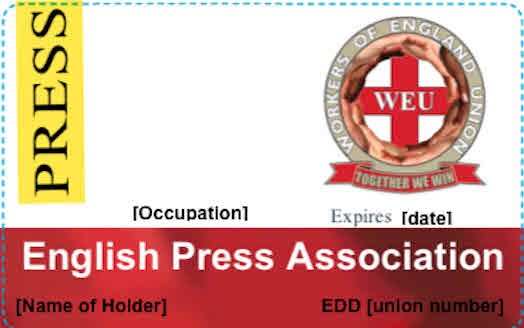 An example of one of the cards

He argued WEU’s cards, which had been bought by 17 of the union’s members, risked causing “serious harm to PA and its reputation”.

PA was founded in 1868 as the Press Association, but the news agency aspect of the business formally changed to PA Media in June 2019.

According to a report of the hearing by PA, Mr Ivison told the court: “The only effective way to address this risk is for the cards to be removed from circulation.”

WEU chairman Robin Tilbrook, who represented the union in court, said the cards were not “intended in any way to hang off the coat-tails, or anything like that, of the Press Association”.

After a short break, presiding judge Mr Justice Meade was told the WEU had agreed to an interim injunction to not use the words “Press Association” or “English Press Association” in relation to “any trade union, journalism, or news reporting services”.

The WEU also agreed to write to its members who had bought its press cards asking them to return them to the union.

The court heard the WEU is considering using the name “English Media Group” instead.

WEU general secretary Stephen Morris has since denied the claim made in court that the press cards were “fake”.

“We agreed to change our wording to English Media Group. We had a few options open to us including the words ‘Press’ and ‘Association’ as long as the words were not used together.

“The new title we have chosen is English Media Group, a name we have used for the past six years in other areas. The section of our website as already been changed to the new name and the new cards have been ordered with the new wording.

“The validity of us issuing press cards as an independent trade union and not affiliated to the voluntary UK Press Card Authority was not in question.”