A 90-year-old great-grandfather took to the skies for a charity wing walk in memory of his journalist son who died aged just 55.

Gordon Carter flew strapped to the top wing of a Boeing Stearman bi-plane funds and awareness for the charity Brain Tumour Research.

Mr Carter, pictured on the plane, undertook the challenge to mark the fifth anniversary of losing his eldest son Martin to a brain tumour in August 2016.

Martin worked for titles including the Western Daily Press, Swindon Advertiser and the Bridgwater Mercury before moving into communications. 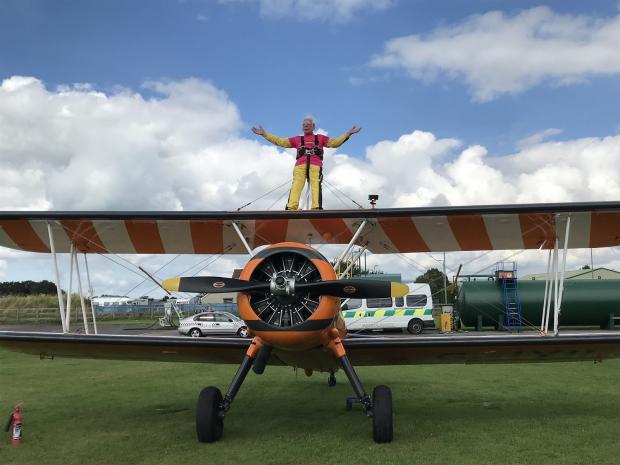 After his challenge, Gordon told the Somerset County Gazette: “I was a little surprised at all the reaction to me doing a wing-walk at the age of 90. After all, I was strapped on so I couldn’t fall off.

“I am very grateful to everyone who has donated in Martin’s memory – the total to date is just over £2,000 including offline donations. It’s good to be helping to make a difference.”

Martin’s partner Di added: “Martin was a big personality; he loved life so much and was always full of the joys of life.

“He was like his dad in many respects, particularly with his love of life, but also in his love of literature and language. Gordon was a huge influence on him.

“Martin would be overjoyed that his dad was doing a wing-walk to raise funds for Brain Tumour Research.

“It is exactly what he would have wanted.”