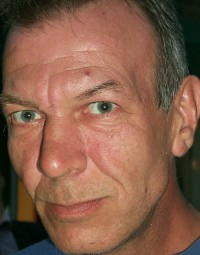 An independent publisher’s former production editor who was “not only respected but loved” by his colleagues has died aged 61.

Tributes have been paid to Garry Barker, who managed the team of sub-editors responsible for producing the KM Group’s newspapers across Kent.

Garry, left, joined the KM Group in 1985 from the rival Whitstable Times, initially working as a news reporter on the Kentish Gazette in Canterbury before being appointed chief reporter on the Faversham News.

He left the KM in 1995 to pursue other interests, including writing an authorised book on his beloved punk band The Clash.

Three years later he returned to the publisher, joining the production desk and rising through the ranks to the production editor role which he held until leaving the group in 2016.

Crispin Whiting, who worked alongside Garry as his deputy for a number of years at the KM’s then-headquarters at Wraik Hill, Whitstable, was among those who paid tribute.

He said: “It’s interesting to see how many times the term ‘laid back’ has been used by my former colleagues in their tributes, because it’s not a term usually associated with team-leading journalists working under pressure.

“But that is just what Garry was. ‘They want to do 27 more change pages this morning, we’re two hours off deadline and three staff members short – what shall I tell them, Garry?’

“Questions like this were unfailingly met with a wry Garry grin, a shrug, and a promise that we’d have a go. And we almost always managed to do it, most of us, apart from Garry, tearing out our hair and swearing.

“Why? Because he was such a thoroughly likeable, lovely bloke and had the ability to bring everyone along into a world where anything was possible. Kind and good humoured, he was one of the few people I can think of who was not only respected but loved by the entire team he led.”

Former Kentish Gazette editor Leo Whitlock, now head of communications at Canterbury City Council, told Kent Online: “Everyone who had the pleasure and privilege of working with Garry in a newsroom has lost someone very, very special.

“Garry was a local newspaper journalist to his very core and you could tell he had done his time on the frontline as a reporter because he had a worldly-wise glint in his eye and a sense of humour that was drier than dry.”

“He was cool, calm and collected in every crisis and they came thick and fast with almost every deadline Garry had to guide both the production desk and news desks through almost every day of every week.

“The fact so many newspapers got out on time to such a high standard with so few people was down to Garry’s steely determination and quiet drive.”

Ian Carter, editorial director of KM’s parent company Iliffe Media, said: “Garry was appointed to run the production desk at probably the most difficult time imaginable. Demands were high, staffing levels less so, and that led to periods of pressure that would have had lesser characters wilting.

“But to simply describe Garry as laid back would be to belie the fierce passion he retained for local journalism.

“Many were the times he would close my office door, drop a pile of proofs on my desk and point out everything that was wrong – the too-long column, the reporter who had confused ‘its’ with ‘it’s’ for the second time that week or the story lurking on page 54 that could have landed us in a spot of legal bother.

“He was an invaluable member of the management team, a great journalist – and a lovely bloke.”

Garry lived in Canterbury with fellow journalist Claire Stevens, his partner of more than 30 years.

He suffered a period of ill-health in 2019 from which he made a recovery, but lately “had not been feeling well” and died peacefully at home on Friday.

Friend and former KM colleague Simon Finlay said: “Garry was a lovely man – a kind, funny and generous friend. He was also a first-class journalist who was well-respected by industry colleagues.

“News of his death came as a terrible shock and he will be truly missed by many. Our thoughts are with Claire.”