A monthly newspaper won special recognition for keeping readers on its patch informed during the pandemic as journalists were honoured at a county’s press awards.

The winners of the seventh Kent Press & Broadcast Awards have been announced during a virtual ceremony.

More than 70 entries were received in nine categories after the number of categories was temporarily reduced for 2021 to focus on individuals, rather than organisations.

The categories included a 2020 Award, won by the Isle of Thanet News, to recognise the efforts of all journalists to keep their communities informed during the pandemic. 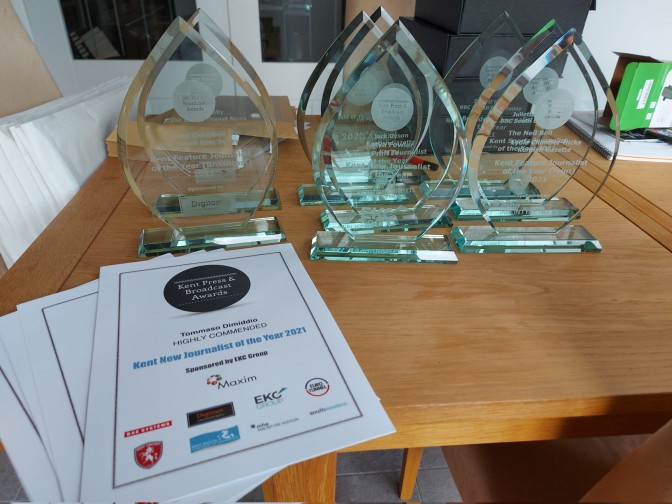 The awards, ready to be posted to the winners

The awards are organised by Kent-based PR and marketing agency Maxim.

Maxim’s Andrew Metcalf said: “We’ve really missed seeing all the finalists and sponsors in person, but we had to take a decision about the awards ceremony at the start of 2021, and at the time the safest option was to keep the awards online for one more year.

“We are grateful to all finalists, sponsors and judges for how well they embraced this decision and continued to support the awards.

“We look forward to hopefully seeing everyone in person again for KPBA 2022.”

Maxim’s Rachel Knight added: “We were really pleased with the engagement of the awards, in terms of people entering, the judges giving up their time and the sponsors continuing to support us even though they couldn’t come along to a face-to-face event.

“As a not-for-profit scheme, these awards wouldn’t be possible without their support.”

The full results are as follows: