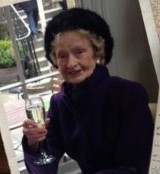 A regional journalist who successfully fought for equal pay for men and women in her newsroom has died aged 92.

Tributes have been paid to Margaret Johnston, who worked at newspapers across Scotland and England during her career.

Margaret, known as ‘Meg, campaigned for equal pay when she was one of only two women in a newsroom full of men.

She began her career Kemsley Newspaper Group as a 17-year-old trainee before moving to Aberdeen’s Weekly Journal in 1946.

From 1950 to 52 Margaret, pictured, reported for daily titles the Press & Journal and Evening Express, later taking on the role of women’s editor in Aberdeen.

She went freelance after the birth of her daughter Beverly in 1957, returning to the Evening Express as a feature writer following a spell in public relations.

However, when her police officer husband William was transferred to Lanarkshire, Margaret began writing for the Hamilton Advertiser, Motherwell Times, Bellshill Speaker and Glasgow Evening Times.

In 1969, she became an agricultural journalist at the Scottish Farmer before working from 1970 until 1975 on a part-time basis for a local authority newspaper.

She then returned to PR with Hamilton District Council and also worked as a freelance broadcaster for the BBC, regularly contributing to the Glasgow Herald and The Scotsman too.

After William won another promotion, they moved to West Yorkshire and Margaret became features editor at the Wakefield Express.

The couple later founded their own PR company called Johnston Fleming PR in 1986.

Beverly told the Press & Journal: “Mum continued after she retired to write critiques for the Harrogate Writers group.

“She was as passionate about her craft then as she was when she started.”

William died in 2006, but Margaret is survived by Beverly, son-in-law John, grandson Andrew and granddaughter Amelia.