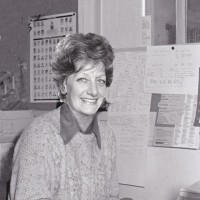 A journalist who continued working until four years ago has died aged 83.

Tributes have been paid to Jo Silcox, whose career working in Wiltshire and Cornwall lasted more than 60 years.

Jo, pictured, had most recently worked as a freelance court reporter in Truro up to her retirement in 2017.

She then wrote her memoirs, The Press Lady, in which she recounted her years as a journalist in Cornwall.

Cornwall Live’s chief reporter Lee Trewhela told the West Briton, one of her former titles: “After two years on another local paper, it felt like I’d arrived when I joined the West Briton, the ‘big boy’ of the regional press in the early 1990s.

“The paper had an enormous circulation and an even bigger reputation in the community as the best source of local news in the area. One of the major reasons for that success was down to Jo Silcox, who I was incredibly sad to hear has passed away.

“An experienced no-nonsense journalist, Jo took me under wing when I joined in 1993 and was a never-ending source of advice, wisdom and quips.

“She would tackle any story with verve and doggedness, as well as great humour when it was appropriate. Jo told it like it was and could be unerringly direct and to the point, but you knew exactly where you stood with her.

“I always thought of Jo as the Margaret Thatcher of the Cornish newsroom – I’m not sure what she would make of that analogy, but she had a similar tenacity and ability to make otherwise powerful men quake. Always good traits to have as a reporter.”

Jo began her career in her hometown of Salisbury, where she trained under her uncle and former Fleet Street reporter Pat Williams, who was then chief reporter of the Salisbury Times.

After working for 25 years in Wiltshire, where she ended as chief reporter for the Salisbury Times & Journal, she moved to Cornwall in 1980.

She started work for the Falmouth Packet, as chief reporter for Camborne and Redruth, moving four years later to the Truro-based Briton.

After being made redundant 12 years later, Jo turned freelance and began to cover magistrates’ courts, firstly for the Packet and later for the Briton as well.

Packet senior reporter Paul Armstrong, who knew Jo for 20 years, said: “Jo was an old school journalist in the truest sense of the word. She could be quite formidable when she wanted to be, but she was a lovely lady.

“She was a great help to me when I first started covering magistrates’ court and later I always enjoyed my weekly conversations with her about the latest court cases she had attended, but lo and behold if we were late paying her invoices.

“Jo was a weekly fixture at Truro magistrates’ court and was respected by everybody there.

“If there was an interesting case happening you could guarantee she’d know about it. A sad loss.”

West Briton editor Scott Harrison added: “Jo was a fantastic reporter. She was a very well respected old-school journalist who took many reporters under her wing.

“It was an absolute privilege to work with her.”

Jo, who lived with her husband David in Feock, Cornwall, died on Saturday 3 April after a long illness.