Journalist who suffered from depression to box for mental health cause 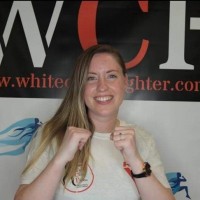 A regional journalist who suffered from depression as a young adult is set to step into the boxing ring in aid of a mental health charity.

Yorkshire Post education correspondent Ruth Dacey will box in a fundraising bout in aid of the Mental Health Foundation.

Ruth, pictured, chose the charity due to friends she had lost to suicide and her own previous battle with depression.

The 32-year-old, who is based in Pudsey, will join fellow fundraisers in an evening of “white collar fighter” matches, where amateurs have to face off in the ring.

Ruth told HTFP: “I have been fortunate to be able to move to a healthier and happier place in my life.

And now I love the idea of raising cash for such a good cause. The Mental Health Foundation provides vital help and support to those people who need it.”

“Everyone has mental health and still in society today we need to talk more about mental health because everybody deals with trauma, anxiety, and difficulties in life in different ways.”

Ruth is currently halfway through an eight-week training regime ahead of the bout, including the introductory “hell week”, to be held at the John Charles Sports Arena, in Leeds, on 11 September.

The award-winning journalist, who has been working remotely for the past 18 months, initially had apprehensions about signing up but after the first session she said she knew she had “nothing to fear”.

She said: “There was a fantastic buzz about the group immediately – every person had two things in common – a sense of adventure and a desire to raise money for charity.

“The training so far has left me sweaty and feeling physically sick on more than one occasion due to the sheer intensity of it all.

“Will it all be worth it? I guess I will find out next month when my newly honed fighting skills are really put to the test.”