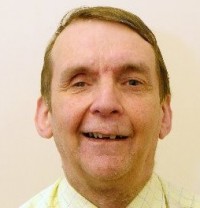 A journalist who earned the nickname ‘Scoop’ in the newsroom where he worked for four decades has died aged 64.

Andrew, pictured, spent 41 years with the titles, which include the Nelson Leader, Colne Times and Barnoldswick and Earby Times, before retiring in 2015.

He was found dead at home last Monday by his brother David after suffering from ill-health for many years.

Andrew began his career in 1974, joining the Times after leaving Colne Grammar School.

East Lancashire Newspapers’ editor Chris Daggett told the Lancashire Post: “Andrew devoted many years of his life to keeping Pendle residents informed of the issues that impacted upon their lives and communities.

“His network of contacts ensured that his notebook was always filled with human interest stories and his ability to turn facts into column inches was testament to his professionalism and dedication.

“Many Pendle residents will remember him with great fondness.”

Former Nelson Leader editor Roy Prenton said: “I worked with Andrew for more than three decades and admired his dedication to his work for the Nelson Leader/Colne Times series as a general news reporter, sports reporter and feature writer.

“He loved being the newspaper’s eyes and ears in Colne and could call on many personal contacts during his reporting years.

“He was affectionately known as ‘Scoop’ because of the number of exclusive stories he brought in about life in the Pendle area and entertained our readers with his views during the days when he penned the popular Mr Pendle’s Diary.

“So many happy memories and laughs back in the good old days and I’m so sorry to hear the news of his passing.”

Andrew’s brother David added: “Andrew will be fondly remembered by people across Colne. He was a real homebody and never wanted to leave.

“He didn’t want to go to university but was recruited for the Colne Times when he was at the grammar school as he was very good at writing.

“Andrew suffered from ill health for many years, and in particular diabetes. He had a spell in hospital 12 months ago.

“We found him at home on Monday and we are awaiting the results of a post-mortem examination but suspect it was related to his diabetes.”

Andrew’s funeral will be held at 11am on Friday 23 July at Denis Hartley Funeral Service, in Colne, followed by interment at Colne Cemetery.